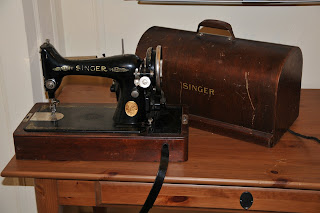 My herd has just increased by 50% !!! (The New Home and Brother have been most welcoming)

I'm not generally a flea market person (to put it mildly) but this past weekend when Kel came back with a selection of interesting things, a snazzy vintage Singer and news of another that was still for sale, I managed to get out of the house within about 10 minutes. 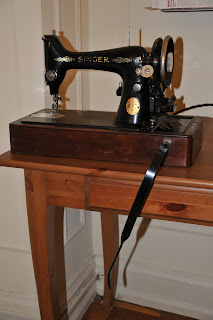 Rushing over, we found that the second machine was still there and started investigating.   No, they'd never tried running it.  No, they didn't know where the pedal was.   No, there wasn't anywhere to plug it in and test it....

So we dithered and played with it more and looked in the case.... and there was this wonky bit of metal.   Kel pulled it out, popped it in the slot and declared it a knee-lever.  (He does actually know a fair bit about antique sewing machines, so I went along with it.)

Not only was it in the original case, with what appeared to be the original plug and belts, but it came with a whole selection of feet.   We've identified the ruffler and the rolled-hem foot - but a few are still a mystery. 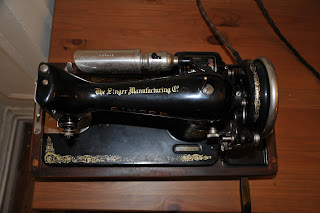 Anyhow, short story shorter, I bought it.   ($35, if you are interested)   Took it home, plugged it in, and it worked.  The knee lever is a little wonky to use, but also kind of fun.   Its old enough not to have a model number, but the serial number on the base places it as a 1930 model 99K.

Of course, within a few stitches, the belt broke (it didn't help that we were picking at it)  but as it appeared to be the original, I can't fault an 80 piece of rubber for falling to bits.   So -- I need to order a new one (and a new o-ring for another bit I don;t know the name of) and whamo-blamo, I will have a machine that can handle several layers of denim!   I see more jeans in my future.

(Check out the original case!  It has a spot for the lever and the box of feet)
Posted by Allison at 8:48 PM