Turns out I've done more than I thought -- only counting finished objects, there are 26 to date plus a hefty handful of UFOs in every state imaginable.  Rather than link to everything (my original and hastily discarded plan) I'd like to pull out a few of my favorites. 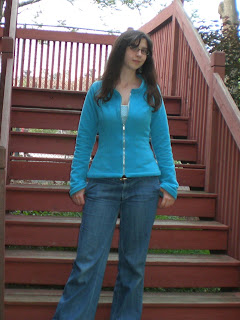 Without a doubt and without compare, the absolute best-in-show is the turquoise fleece.   I wear it constantly (almost daily) -- despite being the same pattern, the fit is superior to the green one (go figure) and it doesn't show every bit of dirt I encounter (white one -- I'm looking at you).

I have some royal blue that eventually needs to become another -- someday, someday. 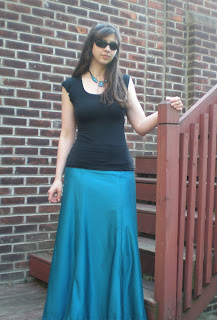 Next up is the athletic mesh skirt.    Lately I've been wearing it about once a week - I really like the lines and the length and how it moves when I walk   I don't actually like the material as it picks up stains like you wouldn't believe -- actually -- I don't believe it.  I think it came that way (it was from Jomar after all) and I just didn't notice it as the fabric is all shiny and whatnot.


This too with be duplicated. 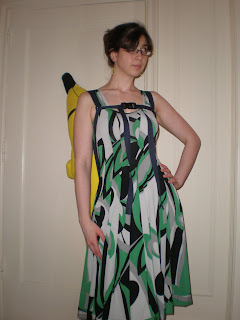 Tying for second place, we have the many-colored-dress-awesome.   I wore it weekly over the summer and still pull it out from time to time since the temperatures have dropped.

Actually, it should probably win for second as I've gotten more compliments on this dress than anything else I own.  (Usually from strangers too, which I count as a double win - they have no reason to say anything at all)

It already is a duplicate of the bed-sheet dress, but I have material for a couple more waiting in the wings. 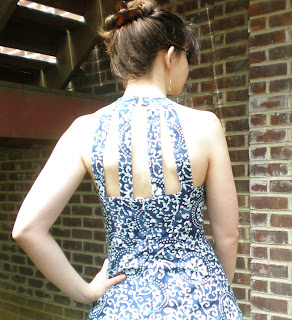 And, the strappy dress -- this one doesn't get as much wear, but its something I'd had floating around in my head for about a year or two and finally made.

If I ever get around to making a basque (long-line strapless bra supported by the hips) then I'll probably do another one of these.  As it is, my dislike of strapless bras limits the frequency in which I wear it. 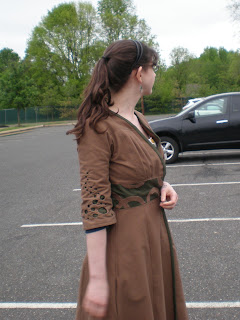 I hardly ever wear the tentacle sleeve jacket - but I'm very proud of it.   Getting all the relief work done for the sleeves was quite the undertaking.

The main problem is that I decided to use magnetic closures.  In theory, this sounds great - stay together unless there is too much stress and then they pop open - the jacket never gets hurt and there are no buttons to interfere with the lines on the front.

In fact, almost any movement will pop it open, and I don't like how it hangs when it isn't closed.   I need to go back and put in snaps or some such instead. 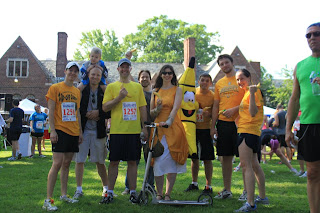 The banana dress only got worn the once, and it may very well never make it out again - but I was pleased with how well it turned out and how closely it matched the idea I had in my head. 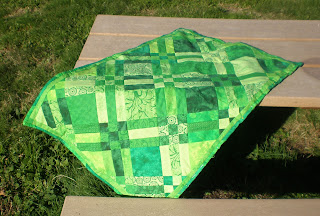 The green baby quilt just glowed.   Holding it in real-life it sometimes looked like stained glass.   It was enough to make me what to quilt again (should I try, someone should really restrain me)

Also - all the seams matched.  ALL OF THEM. 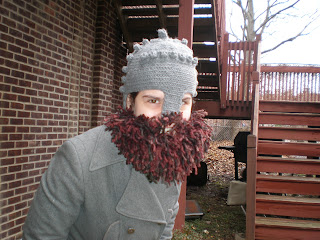 And finally, the dwarf helmet.  I've yet to wear it out in public, but its just too much fun.

It also might get me to knit/crochet again -- its been a while.  I made tons of mittens one summer while working at girl scout camp, and I've made several scarfs and a couple of hats but never a sweater.   Its on my life-goals list.   I've got a zillion knitting patterns for snazzy sweaters, but none for crochet.... I should look into this.


Looking back on the blog, it seems my goal in January was to conquer machine-made button holes, which I did with a vengeance on the baby sleep-sack.   Although not at all since...  I was also supposed to clear out the UFOs.  Some I've dealt with, some languish, and several more have come into being.

For this year -- I'd like to actually make a bra.  I have two books on the subject and most of the hardware.  I just need to sit down and do it.

oh - wait - it turns out I had bigger plans on my first blogoversary.  They include a lined jacket (actually in progress and unblogged), shoes (also in progress and unblogged, although those are more Kel than me), a bra (hah), a bathing suit (half done - I need to top part -- hello bra experience) and jeans that fit properly.  I think this last is an ongoing quest for the ages.

And with that, I wish you a happy and healthy new year.  Also, in case you are interested, go sign up for the giveaway.  I know, its only a sheath and in a single size.   I'll dig through for something more interesting at some point soon.