No sooner do I announce my grand intentions, then I get inspired by something else... Thus, last night was spent drafting my own version of Alabama Chanin's tank dress. I think her work is just lovely, but I don't have 3K to drop on one.

I'd been getting bored of the seersucker, which usually means I'll play with something else for a few days, until I can get myself excited about the primary project again. So, out I pulled my rarely used dummy (it manages to be both too small and too large, depending on how tightly the tape was pulled) but I felt that its fitting issues wouldn't be a problem for knits, popped on a pillow case, basted it to fit, drew on the bodice pattern I wanted, and cut it out.


I then transferred it to butchers paper (which I forgot to get pictures of) andadded the trapezoids for the skirt.  BUT THEN!!! (bum bum BUUUM) 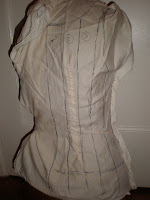 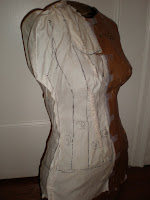 When I went to lay it out, I found I was about a yard short of my lovely red knit. So, crash, bang, boom and shot to smithereens were my plans to sew it up tonight and wear it as a final hurrah for MMM on Thursday. (I very nearly broke down and bought fabric for it this afternoon -- as in walked around the store clutching a bolt of royal blue knit, as I picked up the bias tape and tailors chalk I actually went there to buy. However, I was good, and decided that if I can't have it for Thursday, then I ought to at least pretend I'm going to respect my own arbitary limits and NOT buy new fabric until I've finished stash busting.) (Other than that green viscose from the other day.....) (Also, I thought it might be a good idea to muslin it, to make sure the skirt is as flowy as I'd like -- although I can always add godets if need be.) Ahh well. So much for my plans. (bah and a great big humbug)


Now, MMM update:
Another cotton top - also, for all I was talking about having bunch, there are really only three, and the third is somewhat inappropriate for even the loose standards of my office, so something different tomorrow... 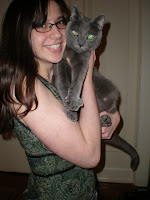 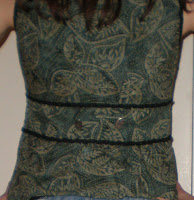 (I felt the need to share Goshu and I looking like crazed psychopaths) Anyhow -- this is yet another frankenpattern. From the bust line down, in the front, its is the same as yesterday's sunflower shirt. The bust and back are from Simplicity 0595, and the band across the back is all me. (shaping and lizard buttons too!)

Also, for anyone who is curious, I added a picture of the back of the sunflower shirt to yesterday's post.
Posted by Allison at 10:18 PM