state of the dress (exclamation point)

I really need to start paying more attention to finished garment size, rather than the sizing on the back of the envelope, as Butterick and I have rather different ideas about reasonable amounts of ease. 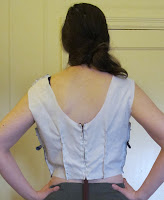 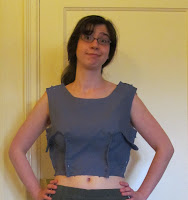 a straight size 14 - no alterations.

Anyhow, to lop this sucker down to a more sensible size, I pinched out an inch on either side, shortened the strap in the back (and smoothed out the neckline after), and cut the back of the armseye a bit deeper (this last isn't shown in any of the pictures above - last minute alterations...)  However, other than that, it was a really good fit.   I didn't have to move the darts or make any other major alterations. 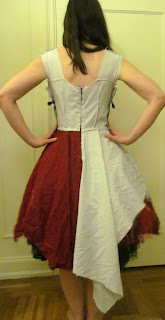 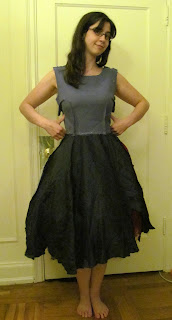 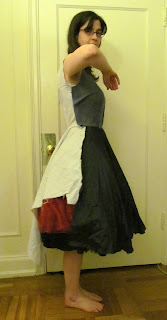 now with alterations! and a skirt! and two crinolines!

(I'm pinching down the seam allowances on the sides - otherwise its hard to see the changes...  fun with lousy lighting late at night.)  Anyhow - the result is looking pretty close to the design on the package - I think their scoop neck is a bit lower than mine, but I can easily fix that during construction. 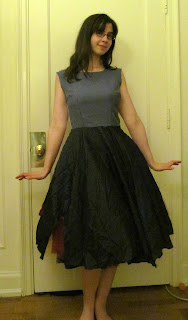 I think I'd need three crinolines to pull off the level of pouf the pattern models have going on. Not sure I really want to travel with that much fluff... so we shall see.
Posted by Allison at 3:11 PM No comments: 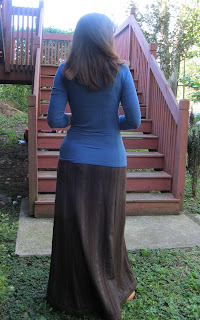 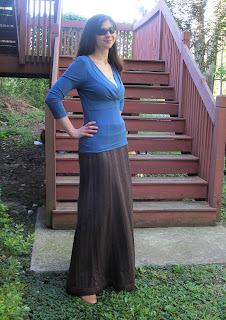 Excuse the sunset-ness of the pictures -- It was finally cool enough to wear this outside, so I dashed out as soon as I got home and changed.  Or we can pretend alien attack.  That could be fun too.

Anyhow, this is the first volley of my be-warm-with-options-other-than-polar-fleece campaign.  (Winter does get a bit monotonous) It's a self drafted 6 gore skirt, with a side zipper.   Its made of a thick woven cotton, with blue and white sewn (maybe woven, but it looks like stitching) stripes.  Its been sitting in the stash for ages, waiting for me to come up with something interesting.
I've developed a fondness for floor length skirts lately, and getting the hem to the right length is a bit of a trick.   (I find about an inch off the floor is good - doesn't drag, but looks like it might)   Anyhow, to do it without help, I use my handy-dandy chalk marker on the lowest possible setting 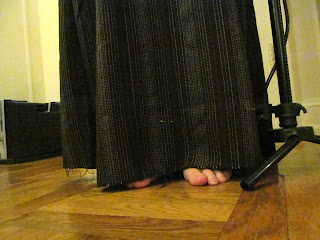 Due to the stand, this still ends up being a few inches higher than I'd like, so after chalk marking, I go around again and add 3 or 4 inches (depends on the weight of the fabric) 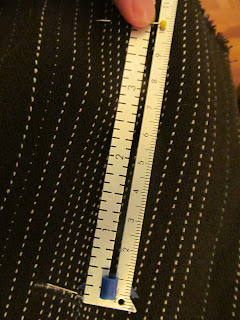 and voila! floor length hem!  In this particular case, I actually went with three inches, and then attached a hem band to the bottom.   This allowed me to use the band's seam allowance to anchor the hem, resulting in no visible stitches.   (the close up of the stripes, a few pictures up, is actually the interior of the hem.  I serged the end and whip-stitched it in place)

Long and involved story short:   I usually go to the renaissance festival in late October. This year, plans changed and we went today - when the temperatures were in the mid 90s (also, humidity?  yeah. lots.)     So I figured between not having enough time to finish my massive tudor re-do and not wanting to die of heat exhaustion, I would join the legions of women who go as sort-of-not-quite-belly-dancers and generally look pretty darn comfortable. 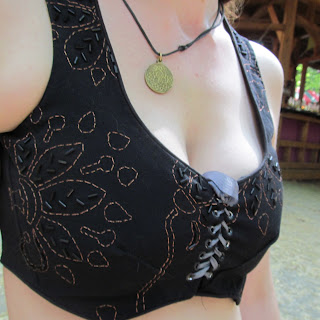 I also decided to experiment with embellishment.    (sadly, not at all visible from a distance, as you can see below)  Both the vest and belt have free hand embroidery based on the Angie's Fall design from Alabama Chanin (but mucked about by me - I didn't trace anything, just sort of did what looked right at the time) I also added a bit of beading in the primary petals of each design -- I ran out of time for anything else)  I've never tried anything so loose and sketchy looking before, and both enjoyed the process and the result.   (i.e. you will be seeing more of this at some point) 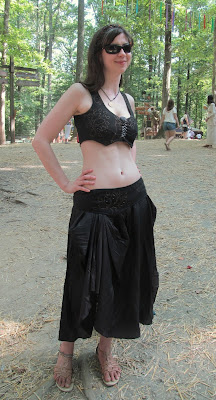 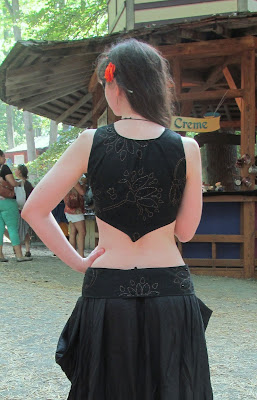 The Good:   as comfortable as could be expected (it was reeeeaaallly hot**, and we were all sweaty greasy messes by the end.  But, as usual, it was renn-fest-tactular.)   (fun fact: some of the performers strap ice-packs under their costumes to handle the heat and the layers.)

The Bad:  black on black really doesn't show up well.   Next year! colors!   (However, given this was made of the scraps of an old ikea slip cover, I think we can give it a pass)

Best part of the day?   I was able to wander around for hours (and drive there and back) and my knee didn't bother me.   (I tore my meniscus in March, and this was a first for me.)  Its aching  bit now, but I think that's more psychosomatic than anything else.

Pattern details:
The vest is based off the bodice of simplicity 3673, with pointy bits added, the neckline lowered and the opening moved to the front.

The belt is from simplicity 2158 (which is actually a belly dance costume, shock of all shocks.  It's rare I use something as intended - I think I originally got it as a basis for a bathing suit.)

The skirt is the lining I pulled out on an 80's monstrosity and now use as general purpose I-need-a-black-skirt-and-don't-have-time-to-make-what-I-want type of thing.

*Short digression on Amanda being a hero and pulling it off despite the heat.   She is amazing and insane and knows a lot of the performers and their secrets for making it through.  Although, I'm pretty sure she was ice pack-free.  Clearly, superhuman.

** not to be confused with I-refuse-to-go-outside-and-turn-into-a-hermit-hot, which is around about 110. like earlier this summer.  (33 and 43, respectively, for you Celsius folks)

(yes. I know, lots of fuss.   but the weather was the main topic of conversation today, along with making sure everyone had enough water.   I think I'll try to go again in a month or so....)
Posted by Allison at 11:50 PM 2 comments: