Happy Thanksgivingukkah!
okay, so technically not until sundown, but still.  just go with it.

Anyhow, for the only time in our lifetimes (and this won't happen again for something like 70,000 years) Thanksgiving and Hannukah are intersecting.  So, to commemorate the occasion, I have made a menurky.

Wait, what?   A menurky!    A menorah (the thing we use to light candles for the holiday) and a turkey (the thing people of eat and always decorate with) hybrid of awesome.    Thus, menurky.

Initially, I'd just planned to make a construction paper outfit for my regular menorah, but the only packs I found at the grocery store had about ten thousand more pieces of paper than I actually wanted.... but next to it, was a big vat of air dry clay.   Clearly the universe wanted me to form my own menurky (and in hindsight, not burn the house down.... paper and fire, maybe not such a good mix)

After drying for three days, it was time for a paint job.  I used a combination of acrylics I had lying around, and a red permanent marker for the wattle.    Google provided an image of what turkeys actually look like.

And yes, I know, only one candle tonight, but I decided to take glamour shots this morning with all its candelly glory.  So check out the menurky, modeling and generally working it for the camera. 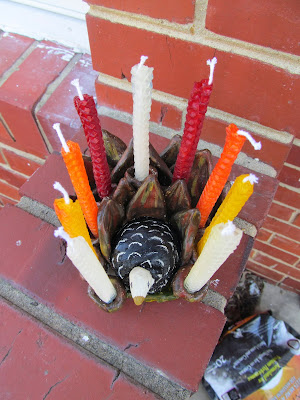 Email ThisBlogThis!Share to TwitterShare to FacebookShare to Pinterest
Labels: menurky

Lace Applique Seams - a quick how to


After rushing through the hem of my lace dress - I decided to re-do it properly - and not just properly, full on couture awesomeness.

The dress is already slightly shorter than I'd like, and the original hem much shorter, so I decided to do a band, but as I'm working with the scraps, no section of lace was long enough to cover the whole front without innumerable little patches and joins, which I didn't much like the look of.  So, instead, I decided to try an applique seam, as described in Claire Shaeffer's Couture Sewing Techniques.


I started by sewing together three layers - underlining, lace and underlining.

Then I laid the new piece of lace on top and matched up the motifs.

The edge of the overlapping motif was cut out very carefully, about a half an inch from the seam.


The edge of the lace motif was sewn down by hand - resulting it an invisible join.

Posted by Allison at 8:29 PM No comments: