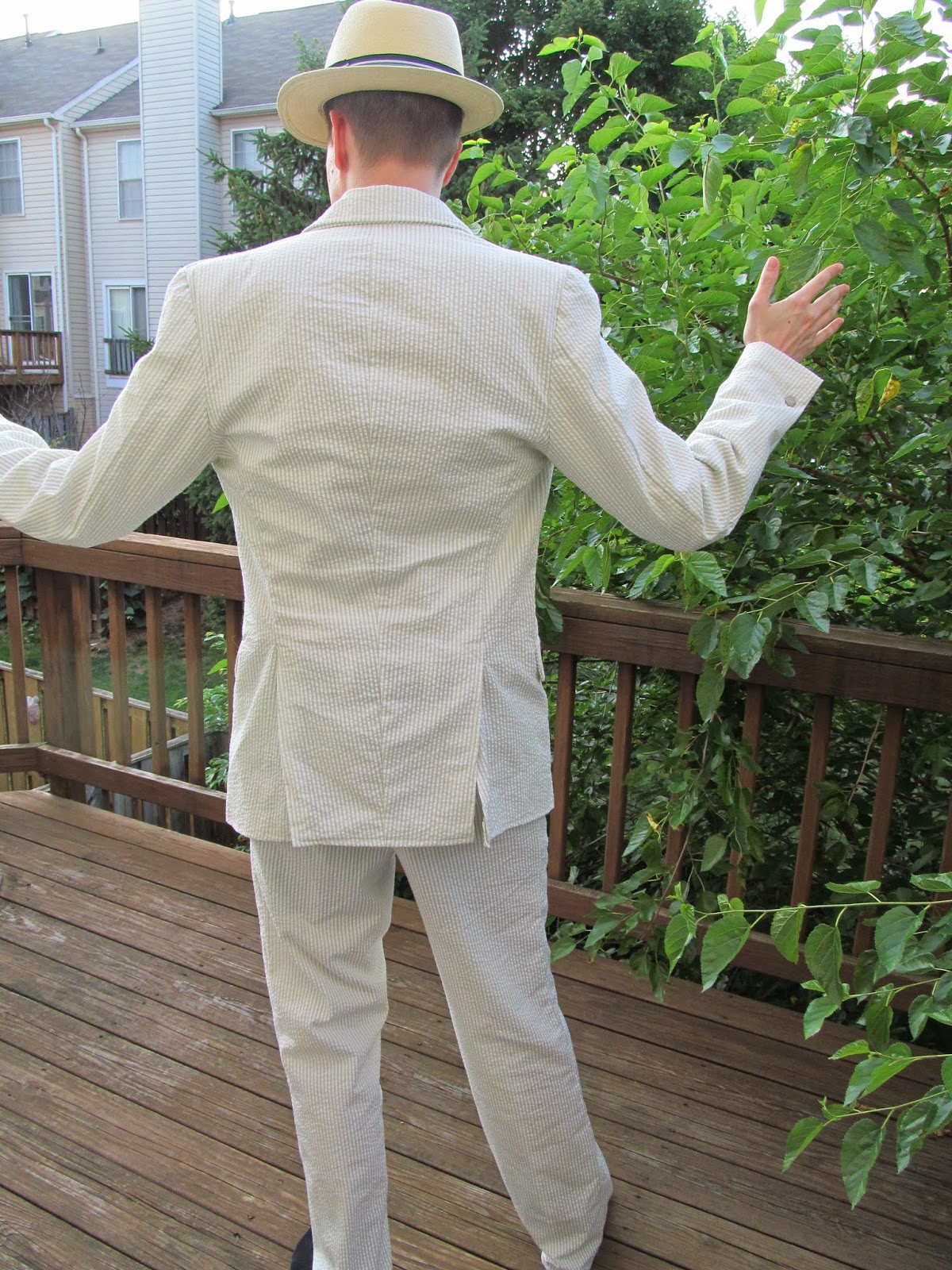 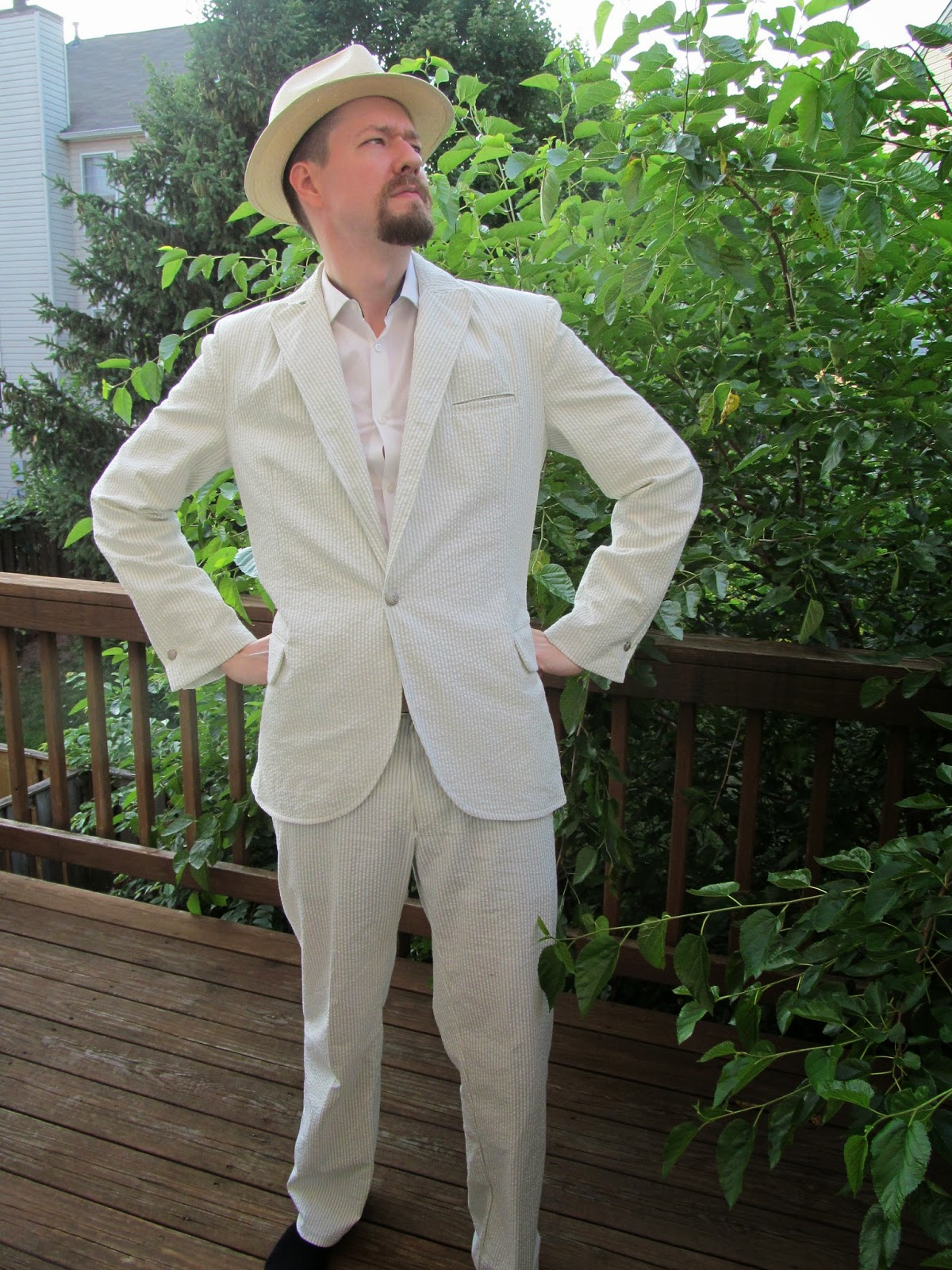 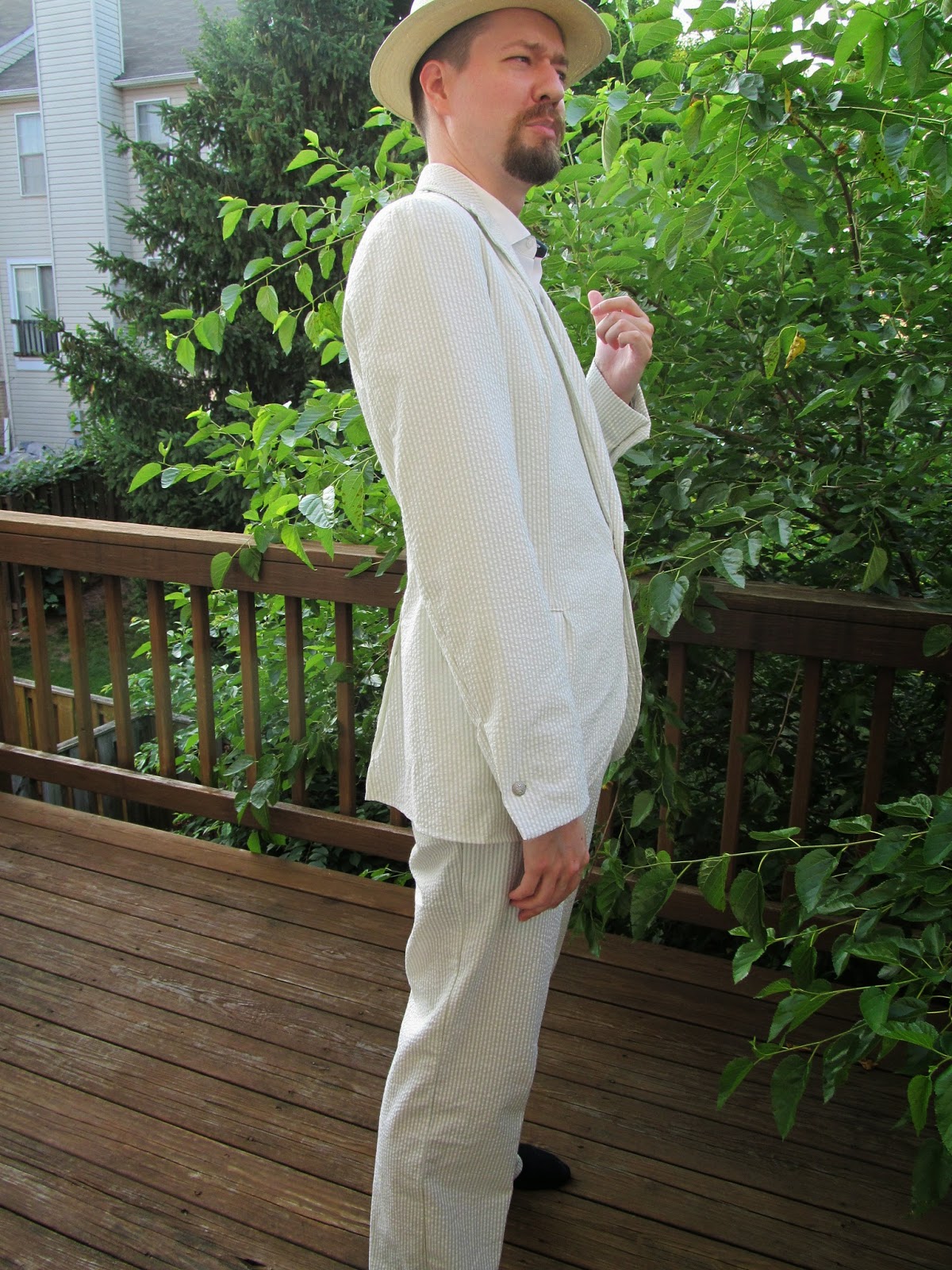 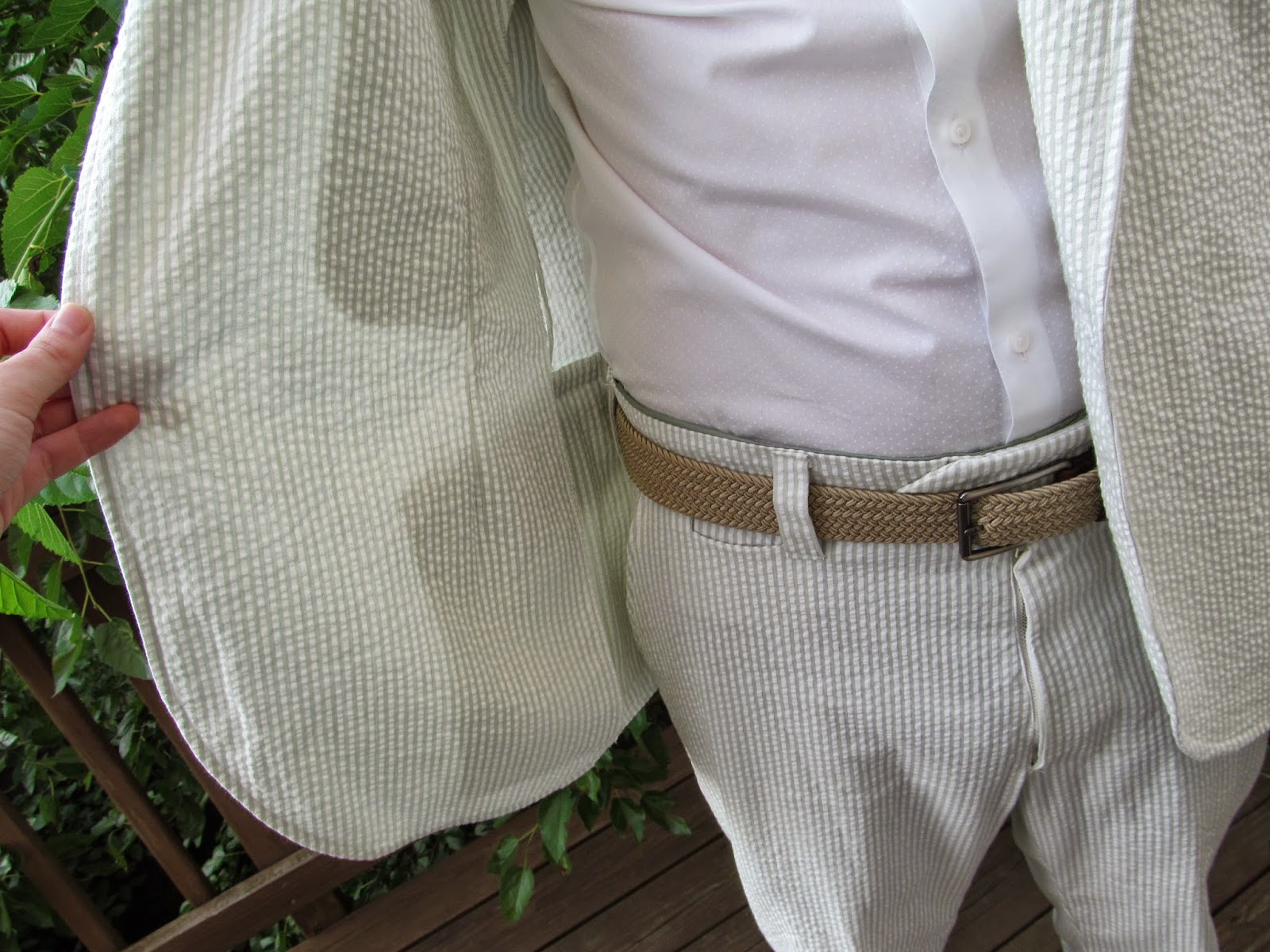 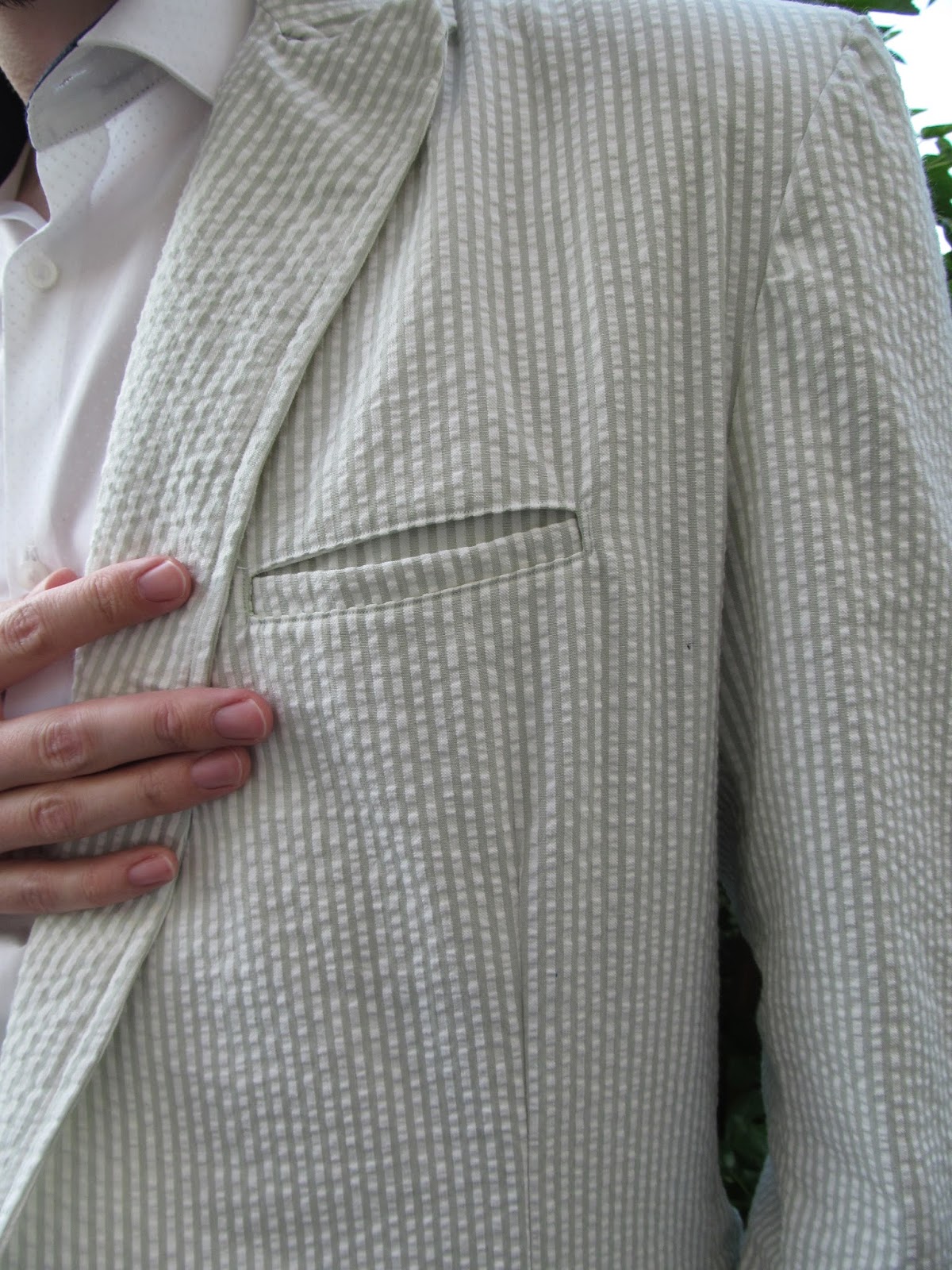 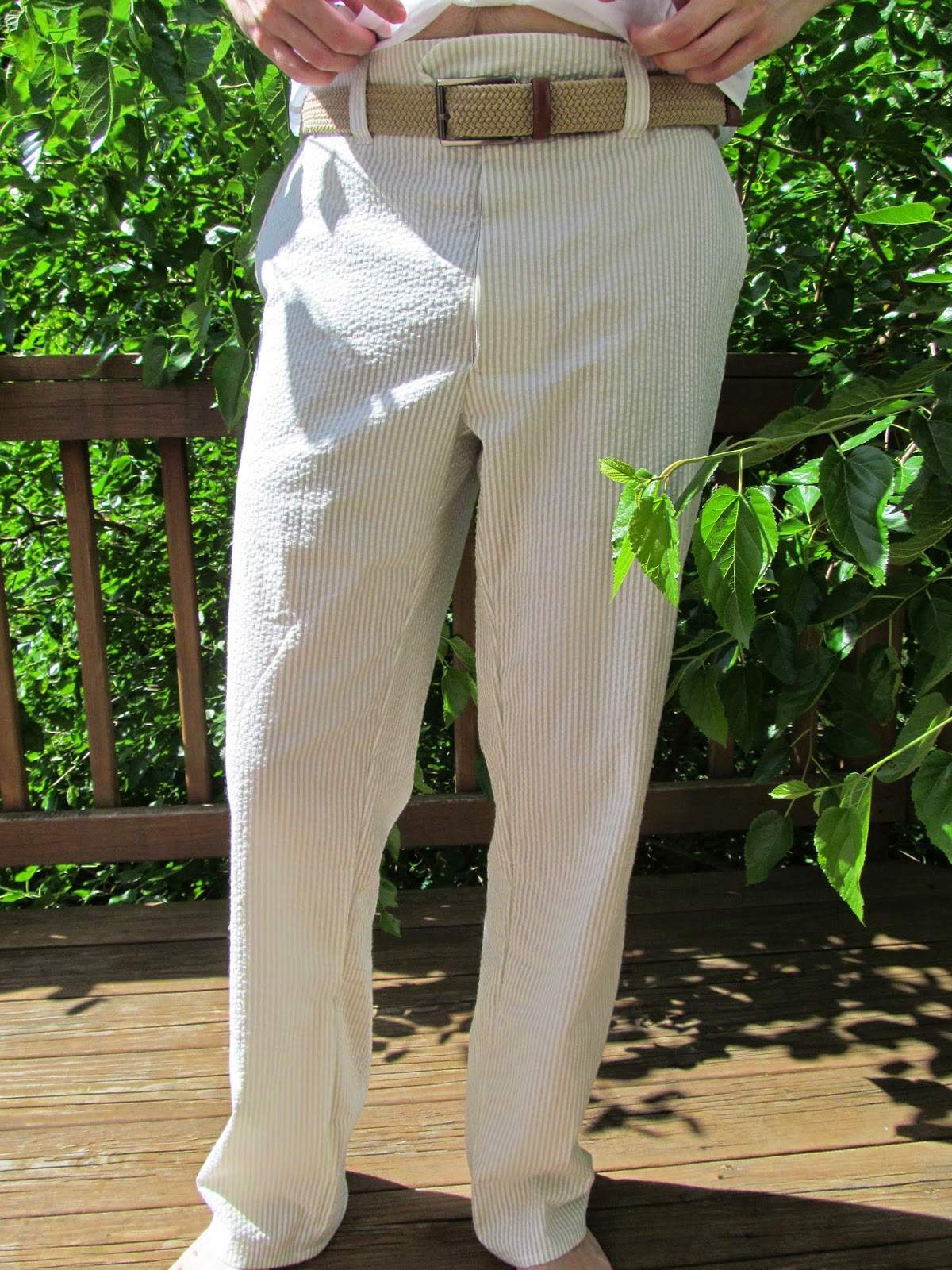 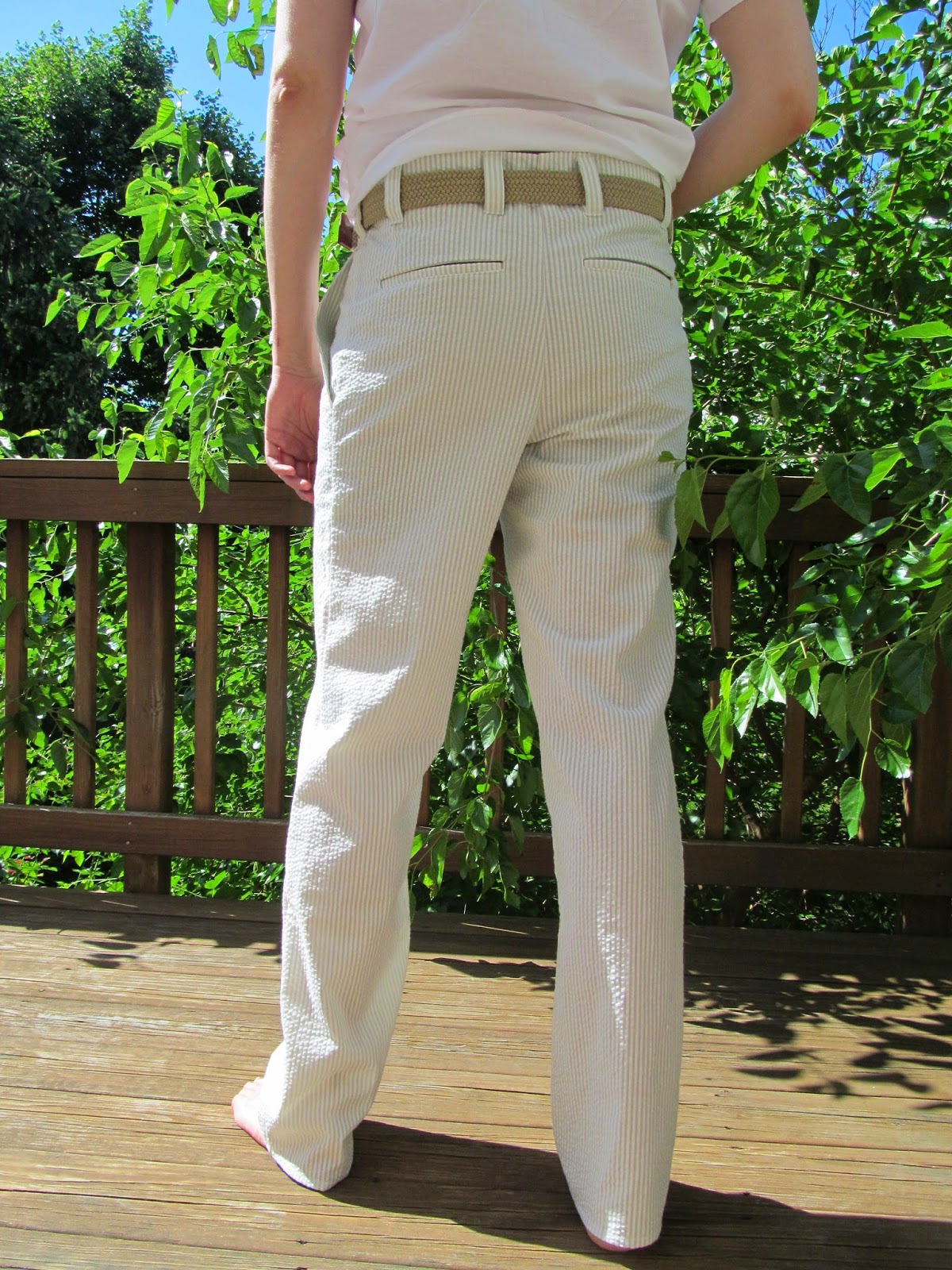 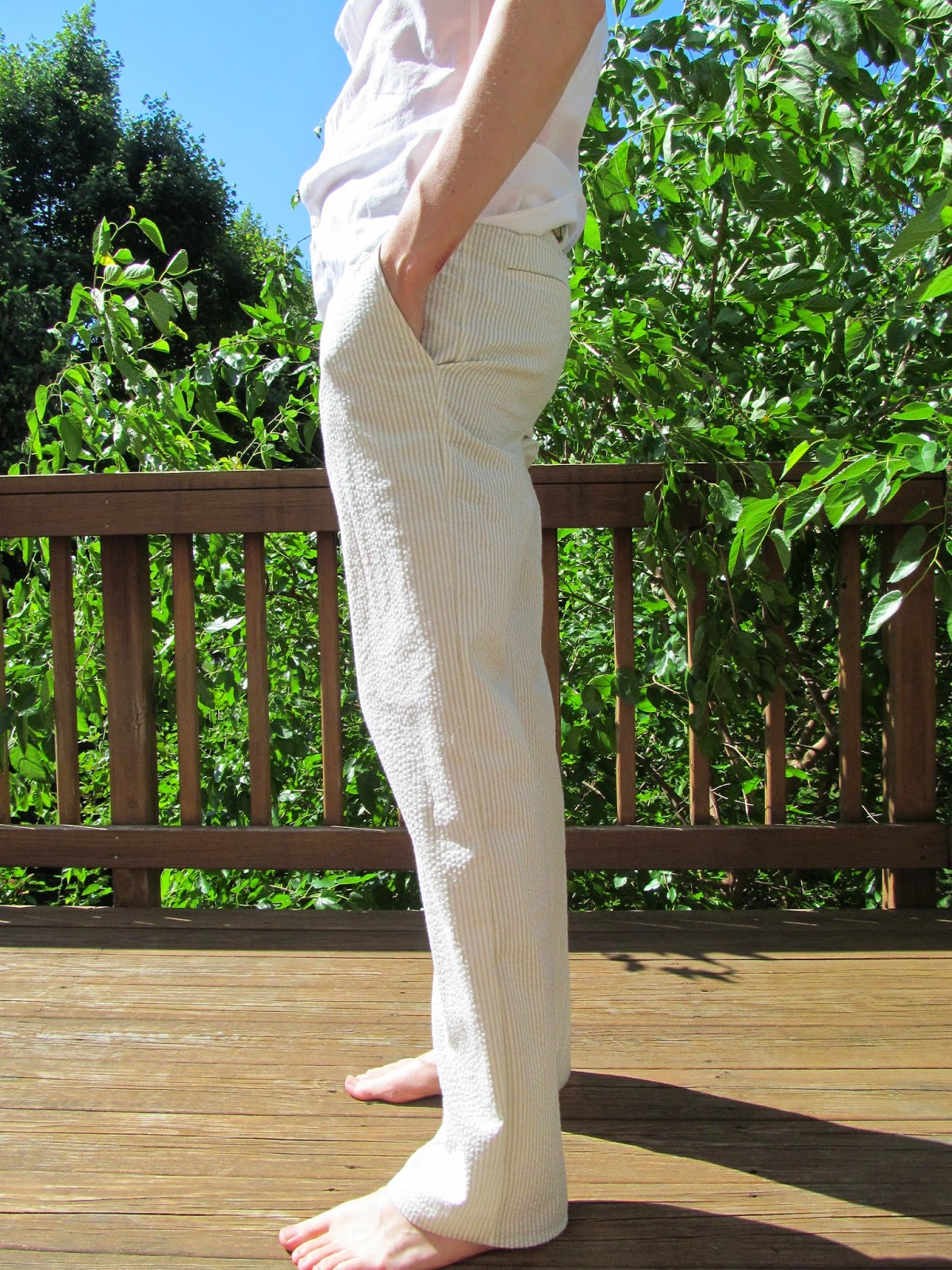 Anyhow, the result of all this is, I like the pattern, but the instructions are a confusing mess with nearly useless illustrations.  If you try this, I recommend coming up with your own construction order and ignoring almost everything about the waistband.  (seriously -- cutting something out on the bias and then immediately interfacing it, with no change in shape or ease is an exercise in futility.) (grumble)
Posted by Allison at 8:12 PM 3 comments:

Somehow, between us, my boyfriend and I got invited to seven weddings this summer.  Then, I shot myself in the foot by convincing him he was insane for wearing heavy jeans all summer, extolling the virtues of linen and seersucker.   Naturally, this wobbled and warped until it became a request for a lovely, lightweight summer suit.   With a deadline.    He needs it for June 21st, which is terrifyingly close.

As usual, following Vogue's envelope sizing resulted in WAY too much ease - I ended up taking a good inch or two of width out of each leg to get even a vaguely reasonable fit.   I also ended up taking a big wedge out to get it to lay more or less flat.  (show in his right leg - conveniently on the right side of the picture)   The problem with men's pants is trying to find that sweet spot, with enough ease for comfort, but not so much they look lumpy.

I would have preferred a few more test runs, but the wedding this is destined for in in a week and a half, so I'm about a third of the way through the real version of the pants.  (Think happy thoughts)

Th jacket is still very much in progress and we'll be doing a third fitting on it this weekend.   Its still sitting oddly on the shoulders and back, and I'm going to need to add more ease to the area to allow him to comfortably drive.   (I tried to convince him that stylish men take their jackets off to drive and don't really need to pick things up.   He was skeptical.)

Has anyone else made this pattern?  Or a seersucker suit?   (they aren't quite like regular ones, having no real lining, to keep everything as cool as possible)   I'd welcome any advice on getting the fitting set.

another one bites the dust

One more item off my list - still to go is the seersucker suit and (recently added) a sundress as a wedding present.   Then I am done and can go back to being my happily selfish self.

Anyhow - the baby dress!    This is a christening gown for my friends' new baby.   And it even bears some resemblance to the inspiration pictures the mother sent me.   It is made of french seams throughout AND has my very first lapped zipper. 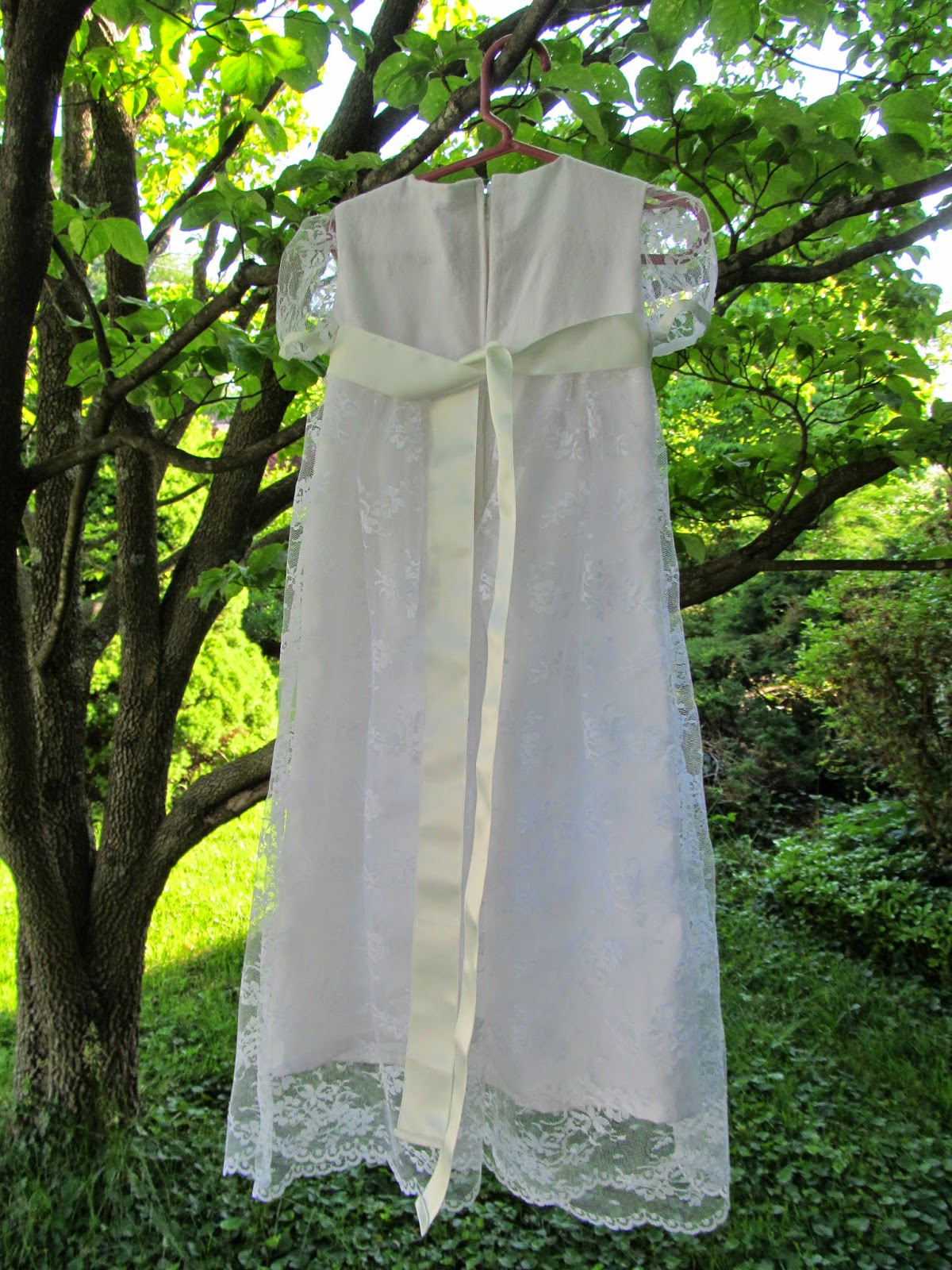 The over skirt and underskirt are two totally separate sections (I always think it looks nicer when they don't share seams)  The main body of the dress is a very soft cotton, for a happy baby, and the overskirt is a floral lace, for a happy mom. 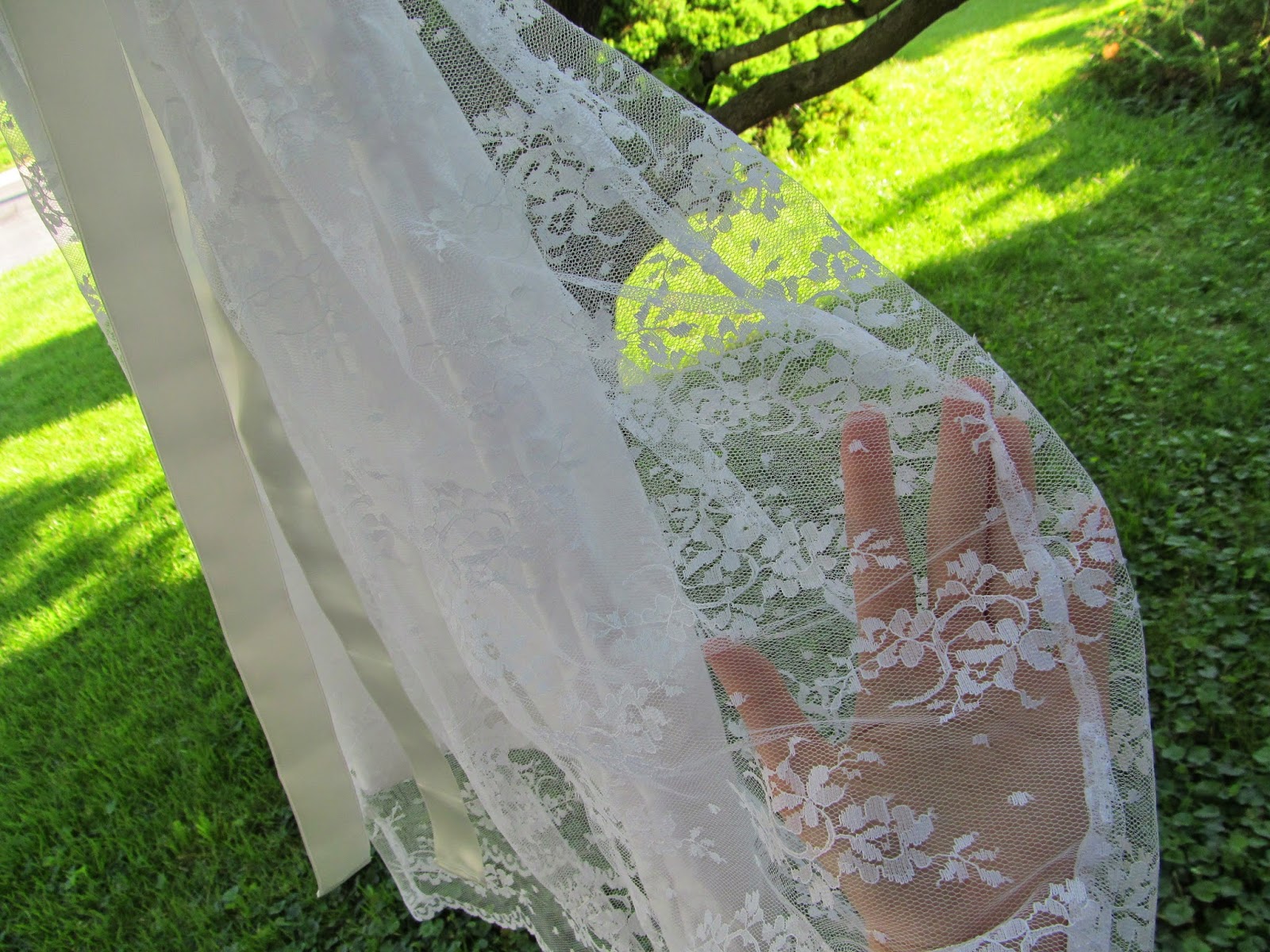 All the internal seams are french as well, and the sleeves are sewn in between the layers of the bodice so that there are no rough edges to scratch or to peak out where they aren't wanted.   All in all, one of the best jobs of finishing I've ever done - and it will probably be worn for about an hour.    C'est la vie. 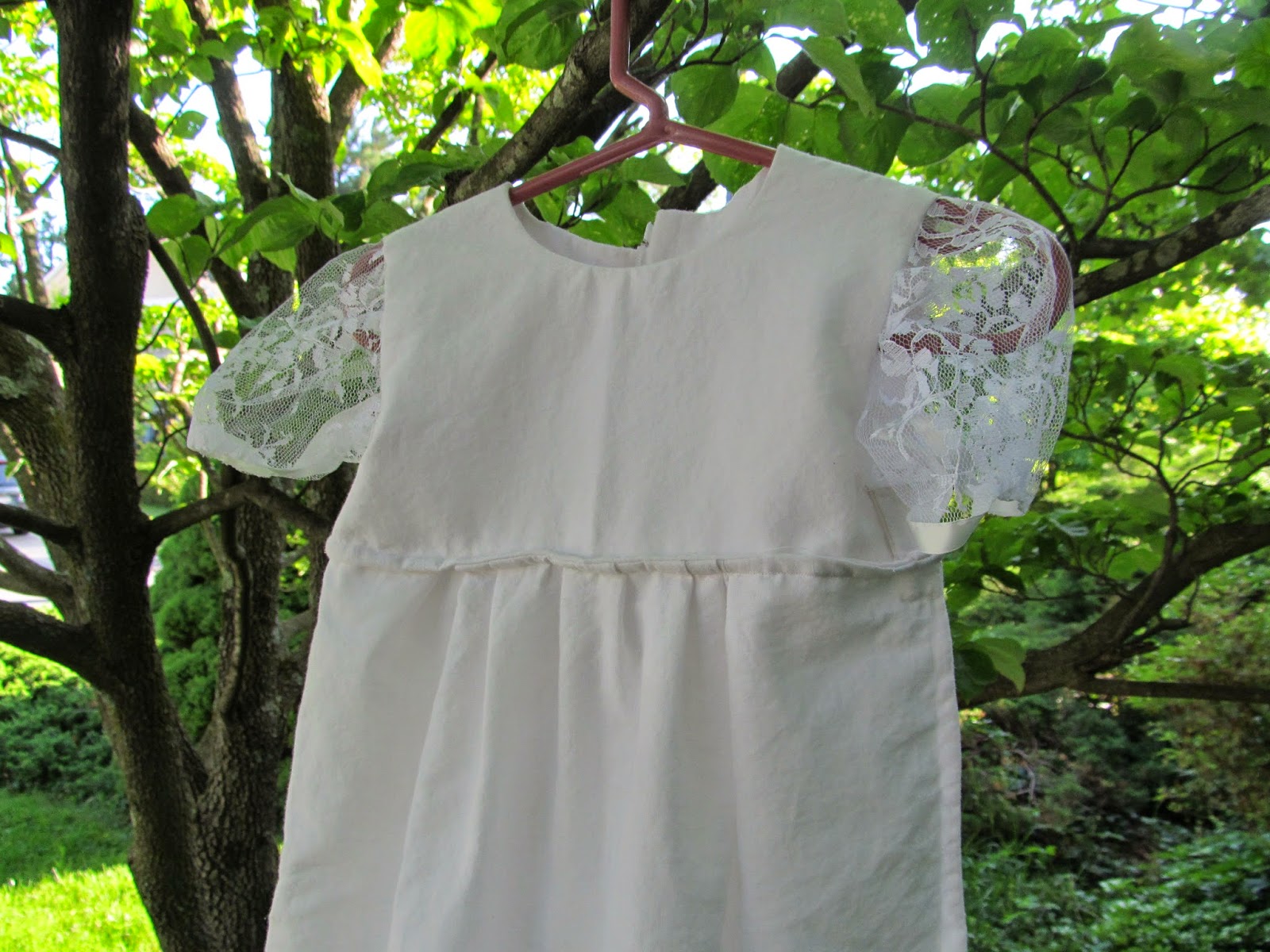 However, despite all this, it bears only minimal resemblance to the original pattern, simplicity 2457.   I used the basic shapes, but otherwise went rouge to get more or less the desired look. 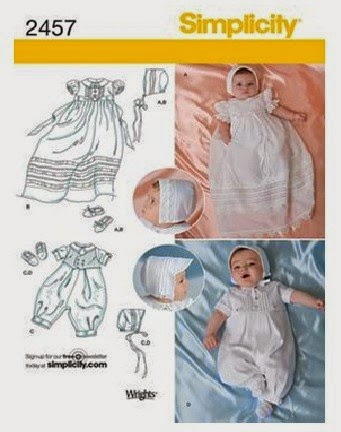