a couple weeks ago I looked at my calendar and realized how close we are to the first of the six (SIX!!!) weddings I've been invited to this summer.   (It is utter maddness.)  Which meant it was time to get cracking on what I've started calling *my* wedding dress, since I think I can probably get away with wearing it to all but one of them (in which I am a bridesmaid).  Oddly enough, they are all in different groups of friends, so there won't really be any overlap and I can be shiny and new each and every time.


Anyhow, I have the shell almost done, the lining put together and even made my own binding tape for the pockets.    This dress is going to get a lot more wear than my formal stuff usually does, so I want it mighty and ready to scoff at anything the washing machine can throw at it.


There has even been progress on the sweater (it comes and goes)  although I'm getting steadily more worried that the sleeves will not be long enough.   The two and a half skeins pictured here are all I have left, and I'd like the sleeves to be about double the current length of the longer one.   I may have to get more yarn - possibly even from another dye lot -- but we shall see.   fingers crossed.


And finally, my snuggly shirts got kicked down the queue when I looked at the calendar, so they're hanging out (cut out!) waiting for me to have time to re-thread my serger.  (Yes, it takes all of five minutes.  But somehow it always seems like an immense burden.)   Considering the change in the weather, I'm also thinking of going with the scoop neck, rather than the cowl option I've cut out.   It would involve adding a binding instead, but it would mean I could use the shirt in spring and fall, and they layer it in winter.

Posted by Allison at 7:12 PM No comments: 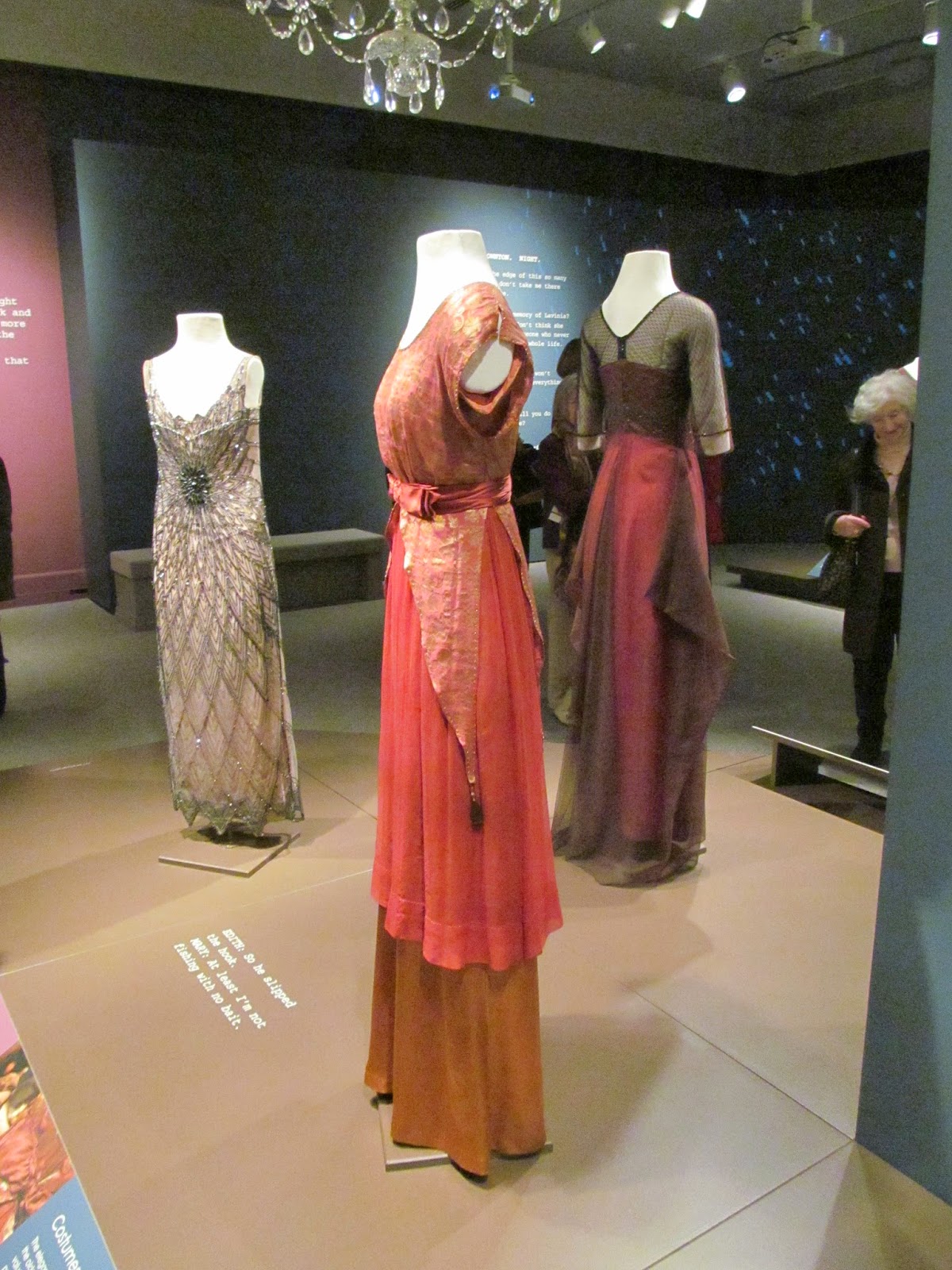 Yesterday I went to see the Downton Abbey costume exhibit currently being held at Winterthur (The old du Pont Estate in Delaware).    Excuse the quality of the photos - they had poor lighting (and technically, pictures were banned... so I didn't dare break out my flash.   But the guards absolutely saw me and didn't seem to care... so I just went with it.)

My overall impression is that the actors are REALLY short.   (as in all the costumes were on platforms and they were all (even the men's outfits) still shorter that me - and according to a docent, the mannequins were made to the measurements of each of the actors.)  (But then again, I went to comicon once, and "met" James Masters (who played Spike on Buffy, and he came up to my chin.   So... there are a lot of short actors.)

(For reference, I am 5'9") (But I also just looked up Hugh Bonneville's height, which is listed at 6'2" .. so I'm not sure what manner of shenanigans was going on with the costumes and mannequins.) (Additionally, it has been pointed out on more than one occasion that I may not be completely sane.  So, feel free to throw that one into the mix.) 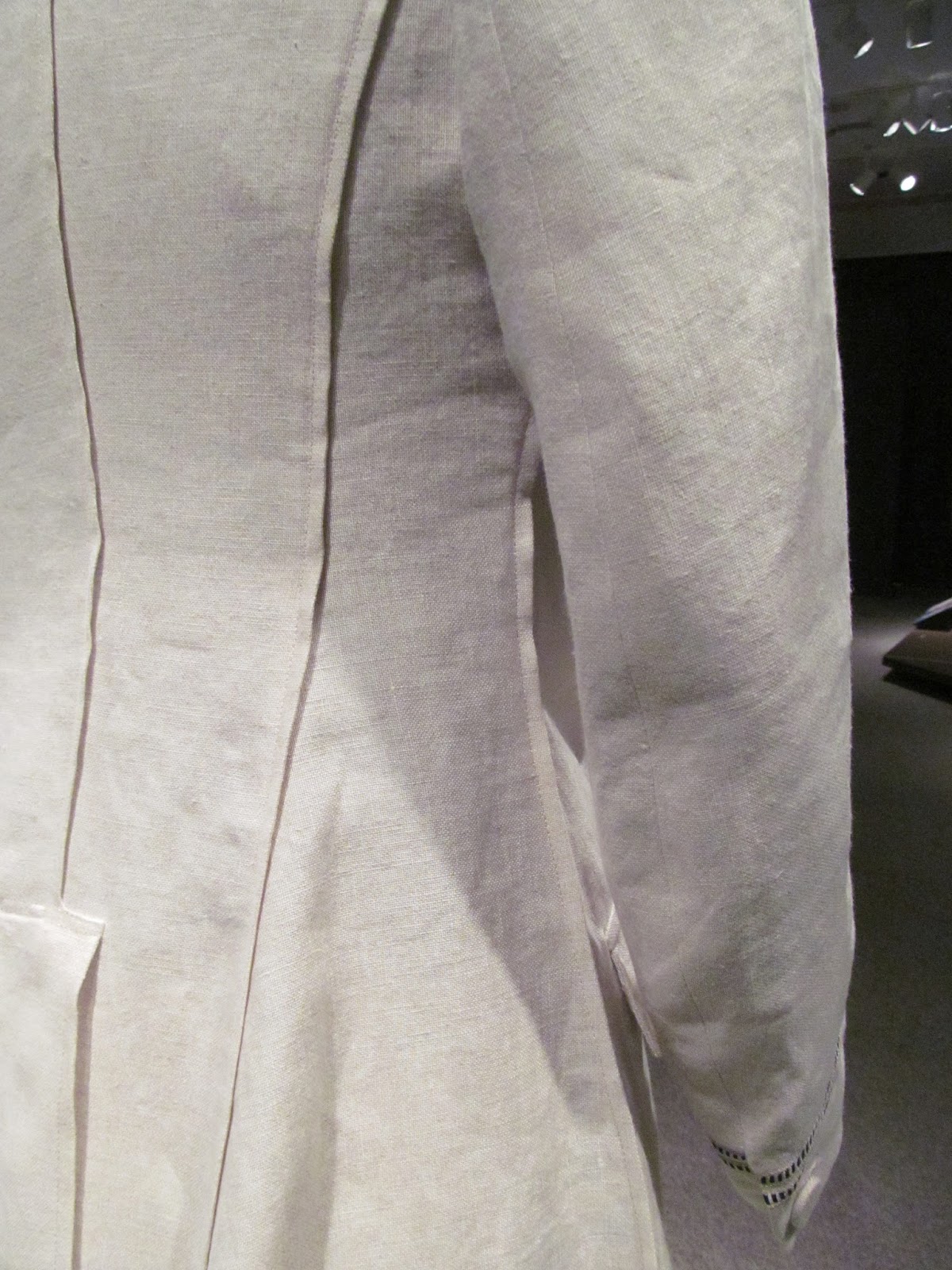 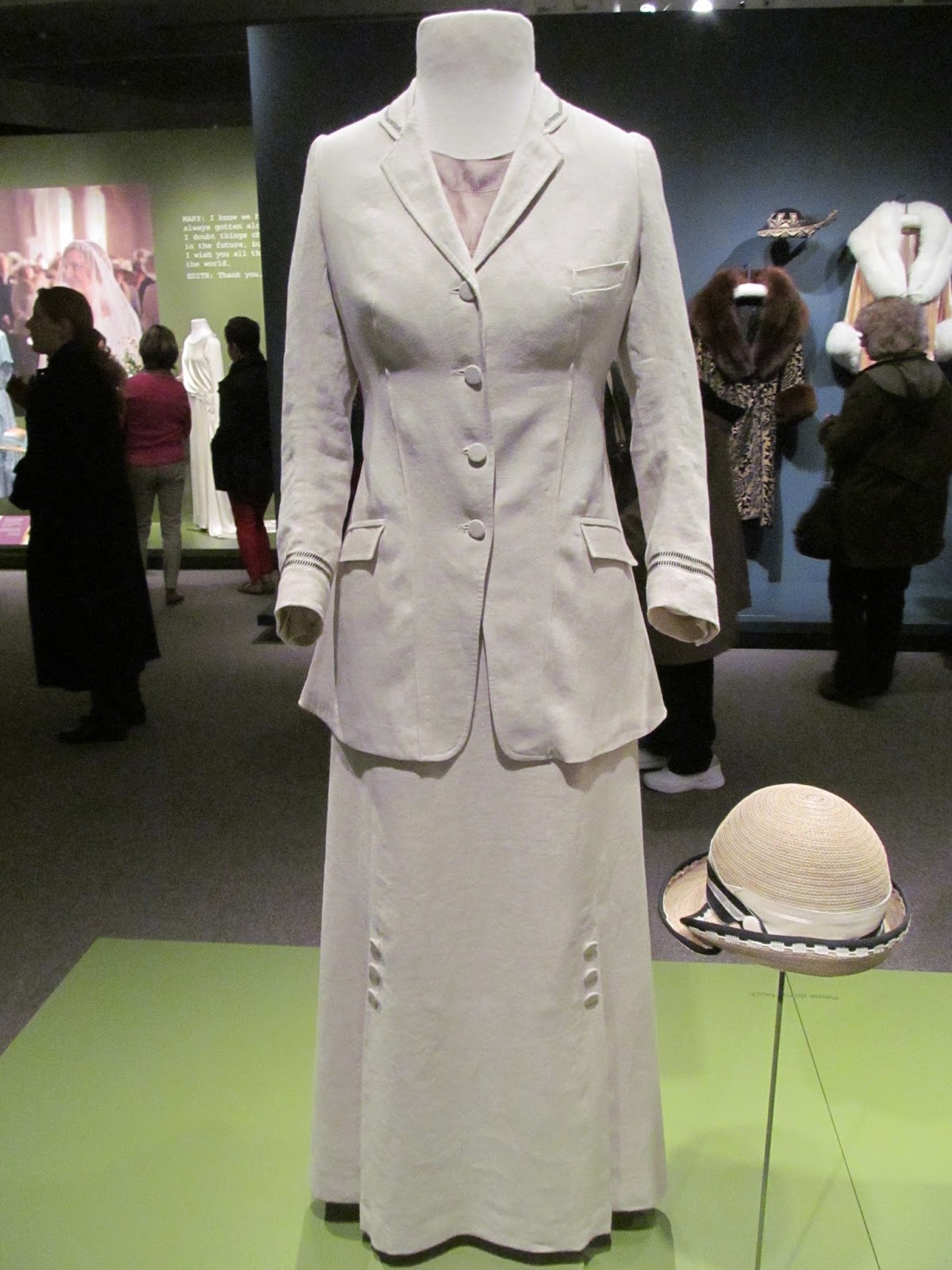 Mary's white suit was one of my favorites -- I particularly liked the seaming, which I *think* is inside out french-seams. 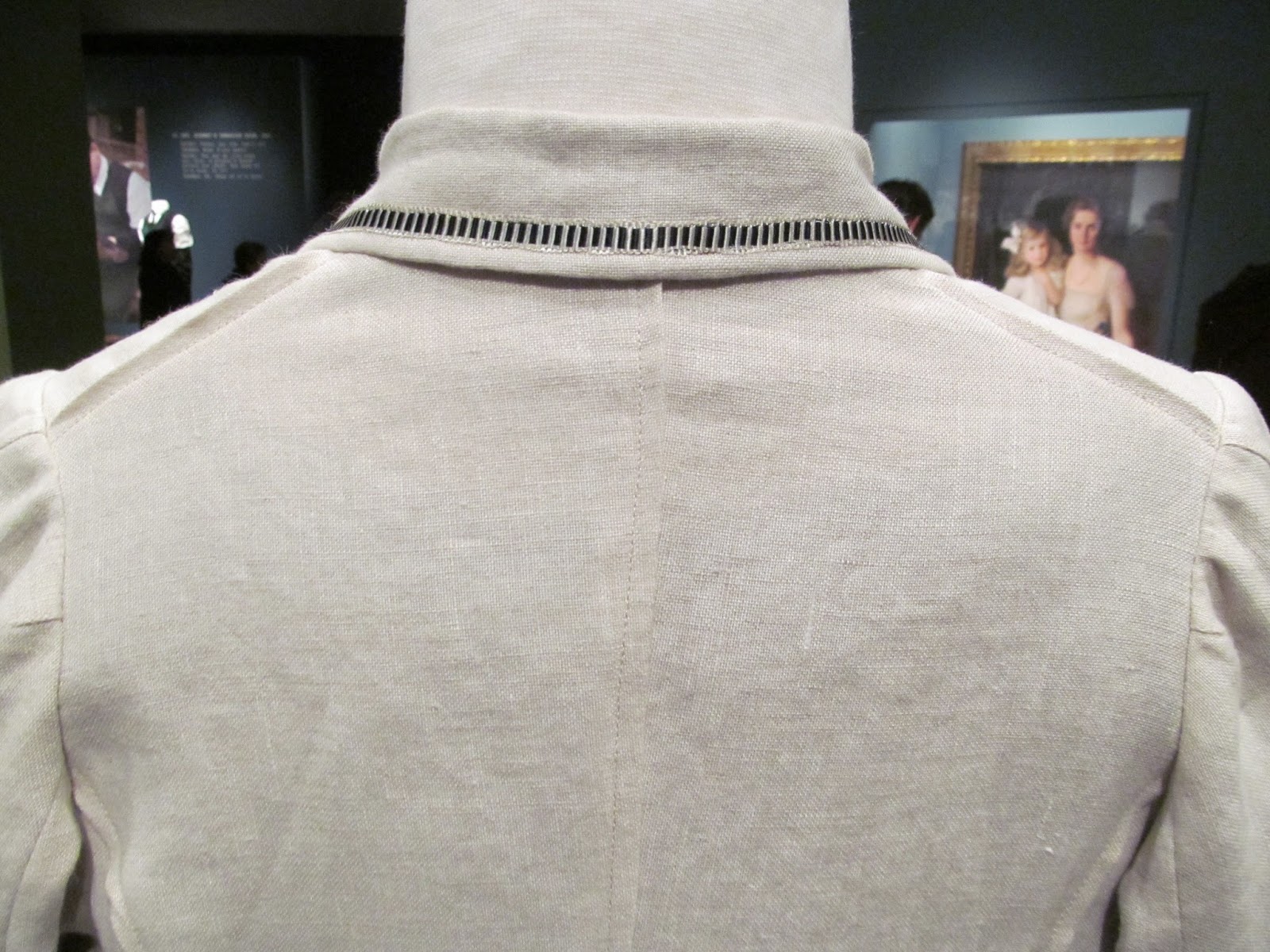 The trim around the collar and cuffs looks from far away to be threaded through the fabric, but from closer up seems to be a ribbon with matching pale stripes. 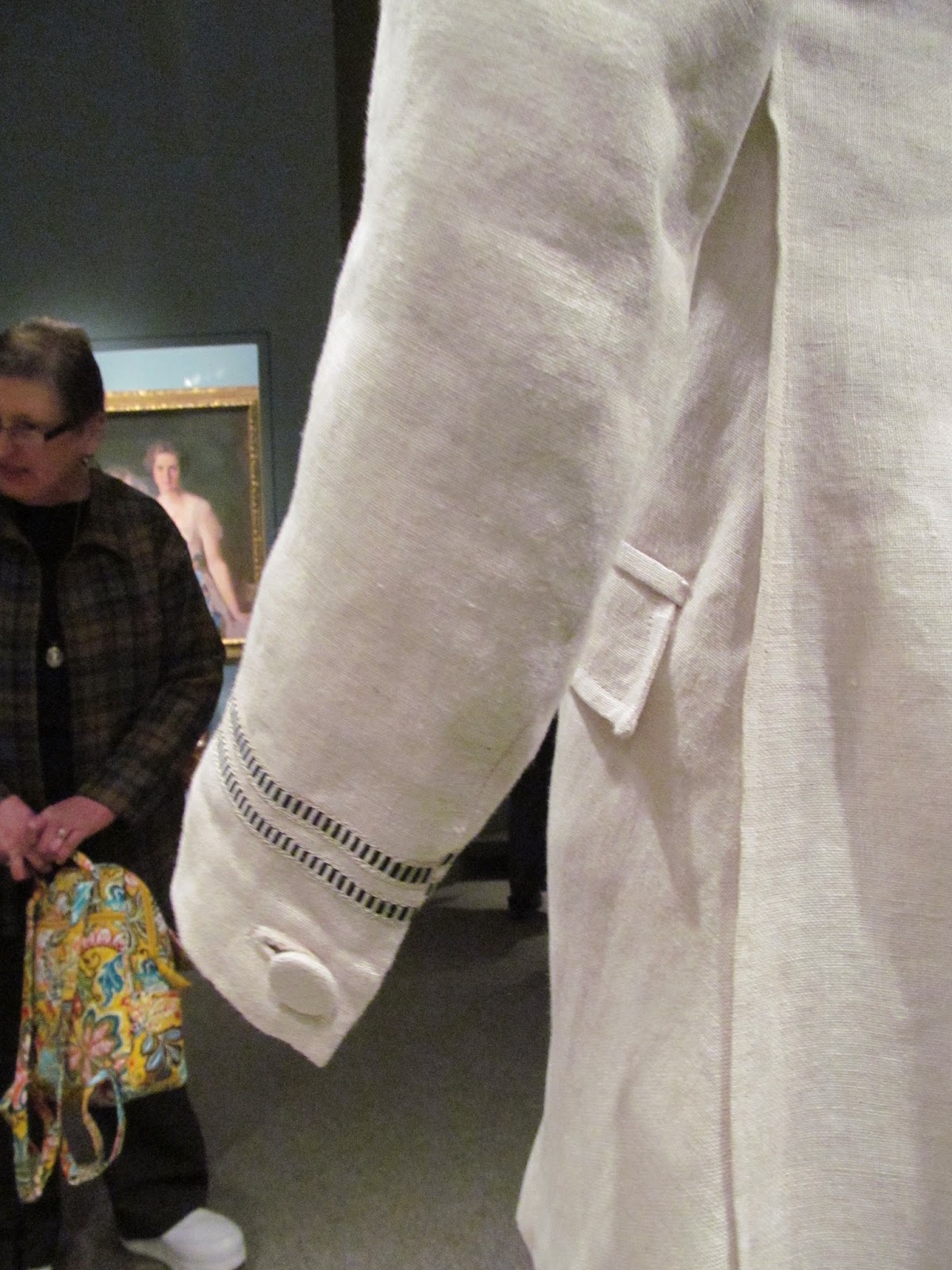 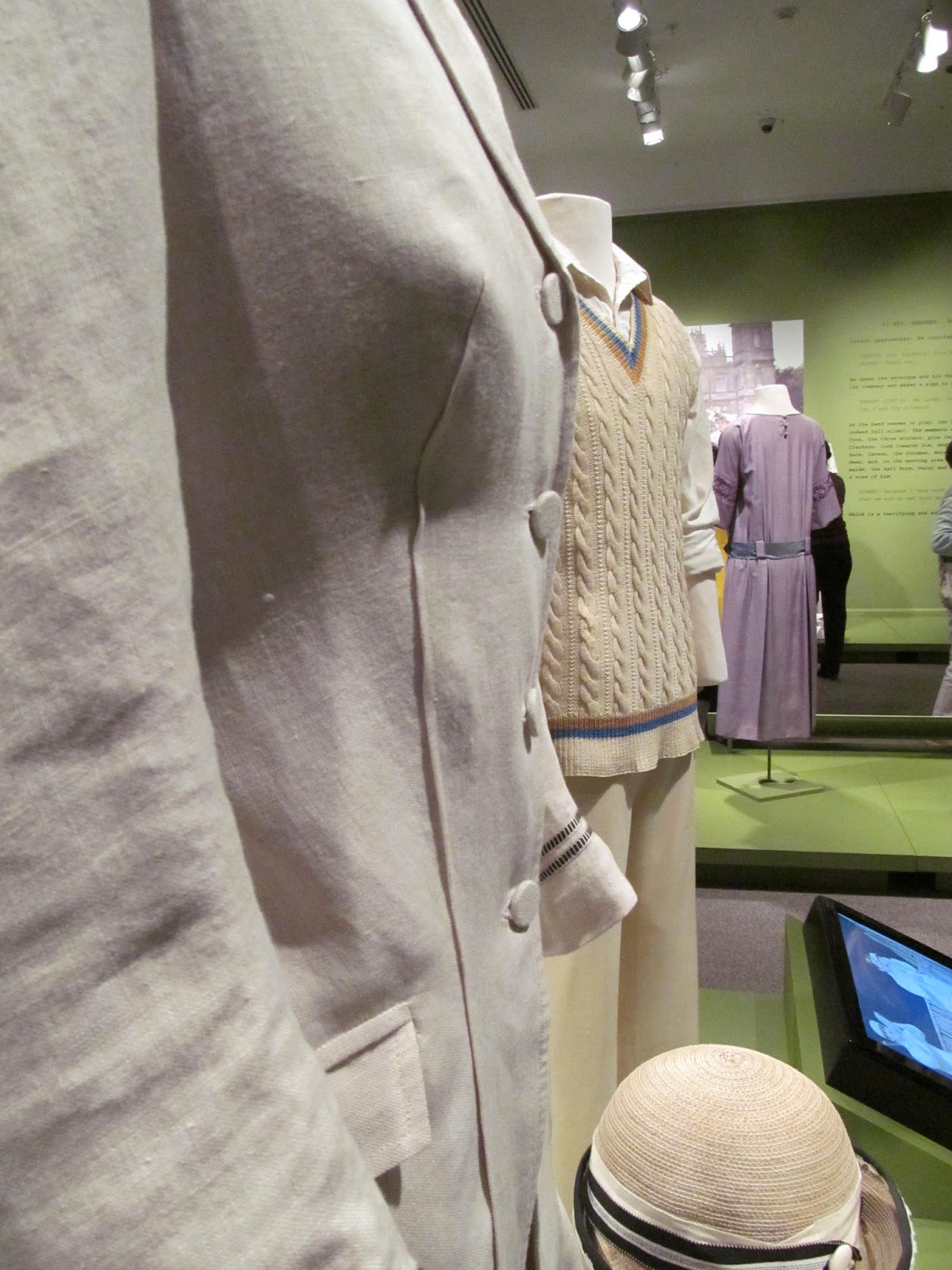 Not surprisingly, a lot of the costume pieces were like that - visually stunning from far away, but with innumerable imperfections close up, that the cameras won't capture.   (For example, one of the pockets on Lord Grantham's hacking jacket was sewn on with the wrong color thread)

On the other hand, there was a lot of fine details that I never noticed when watching the show - for example, all the beading on Edith's wedding dress. 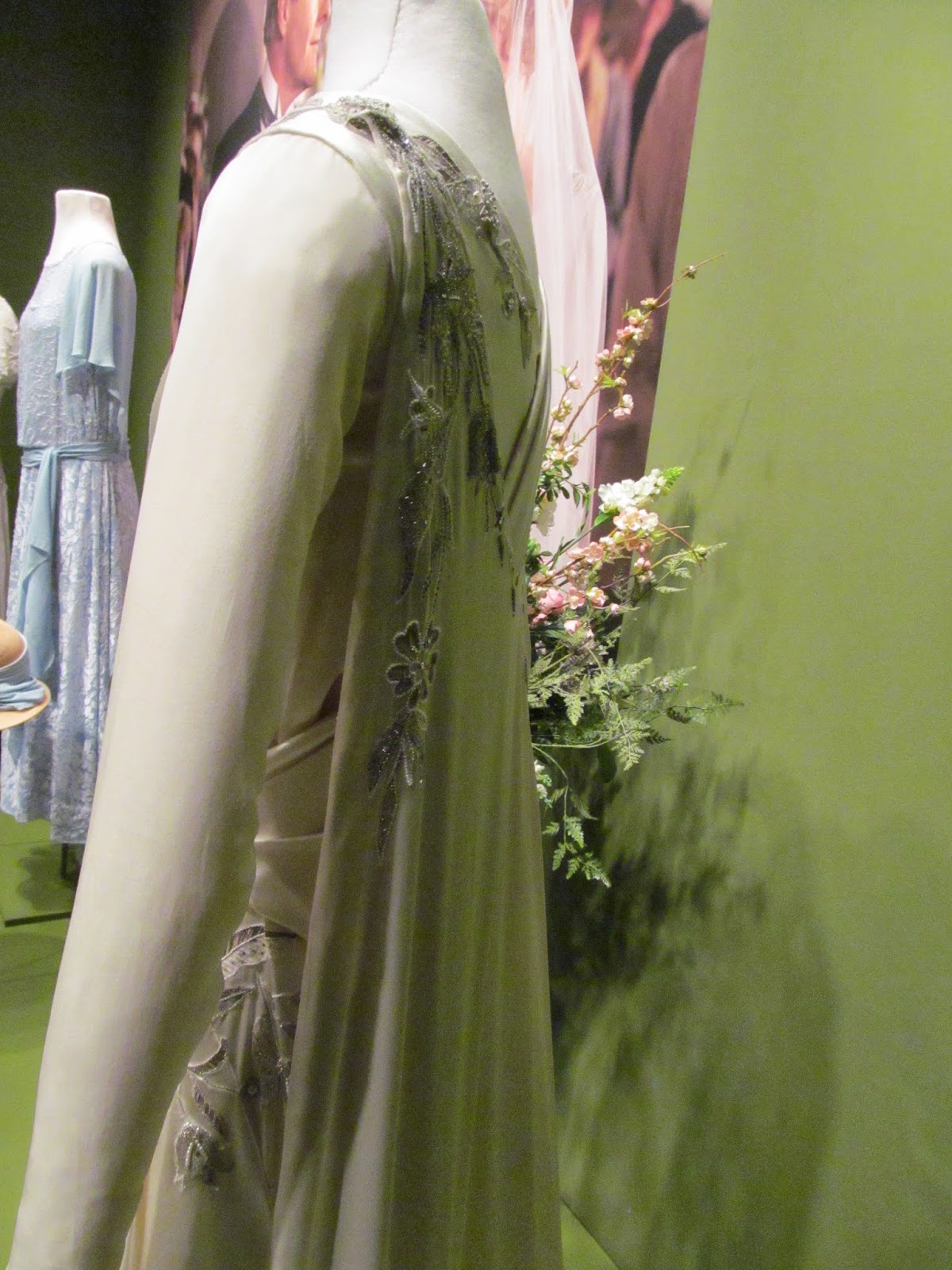 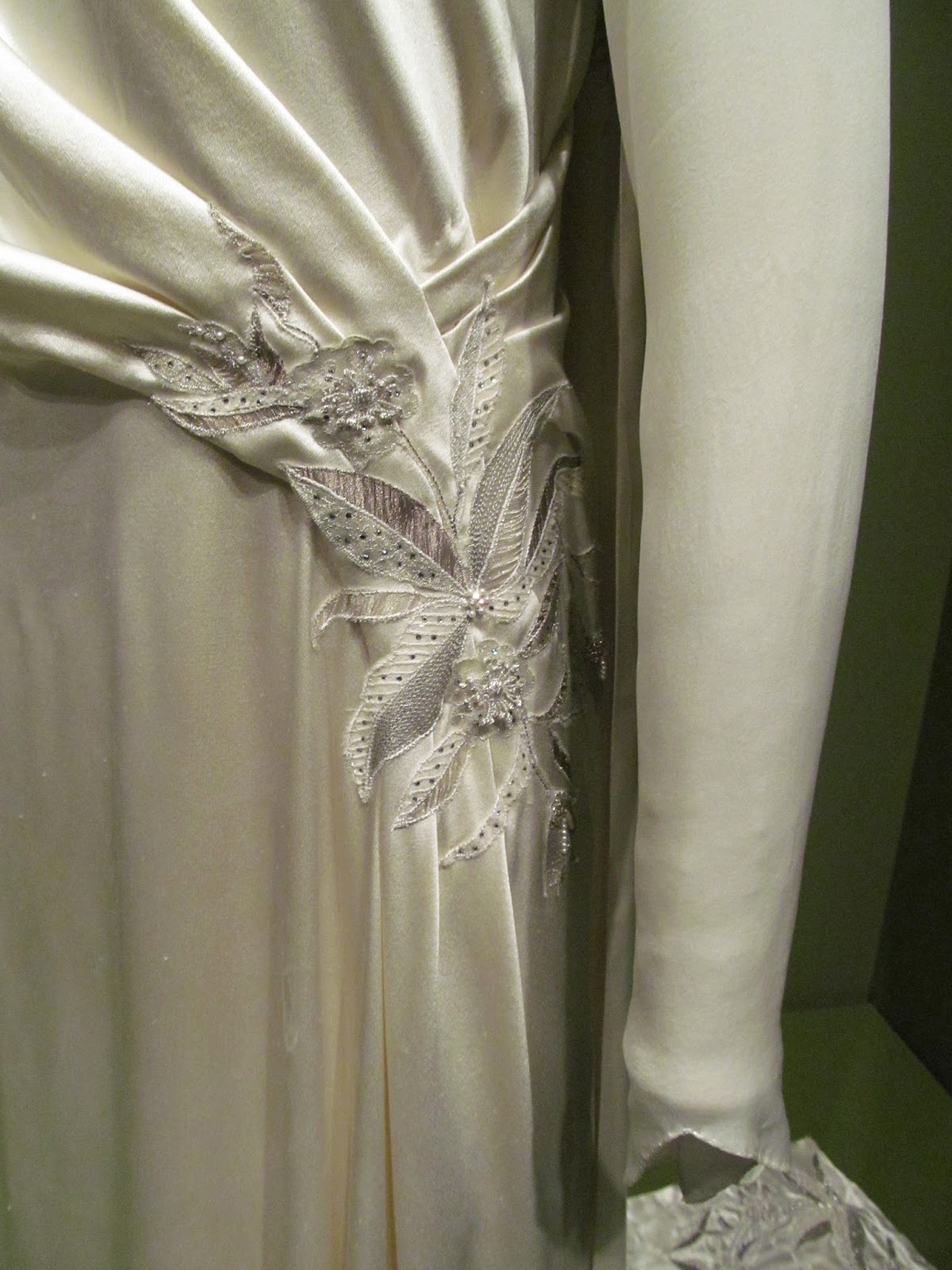 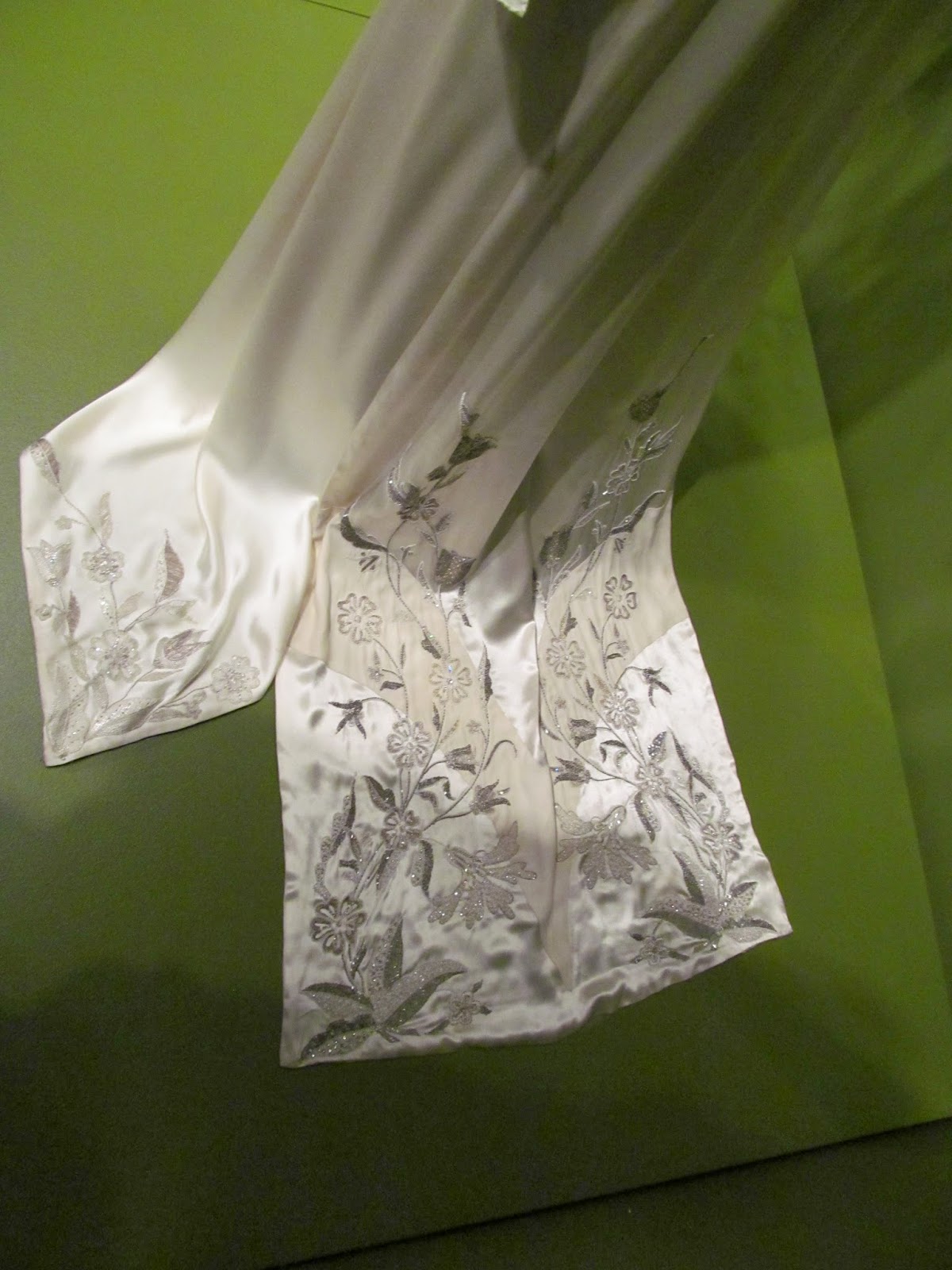 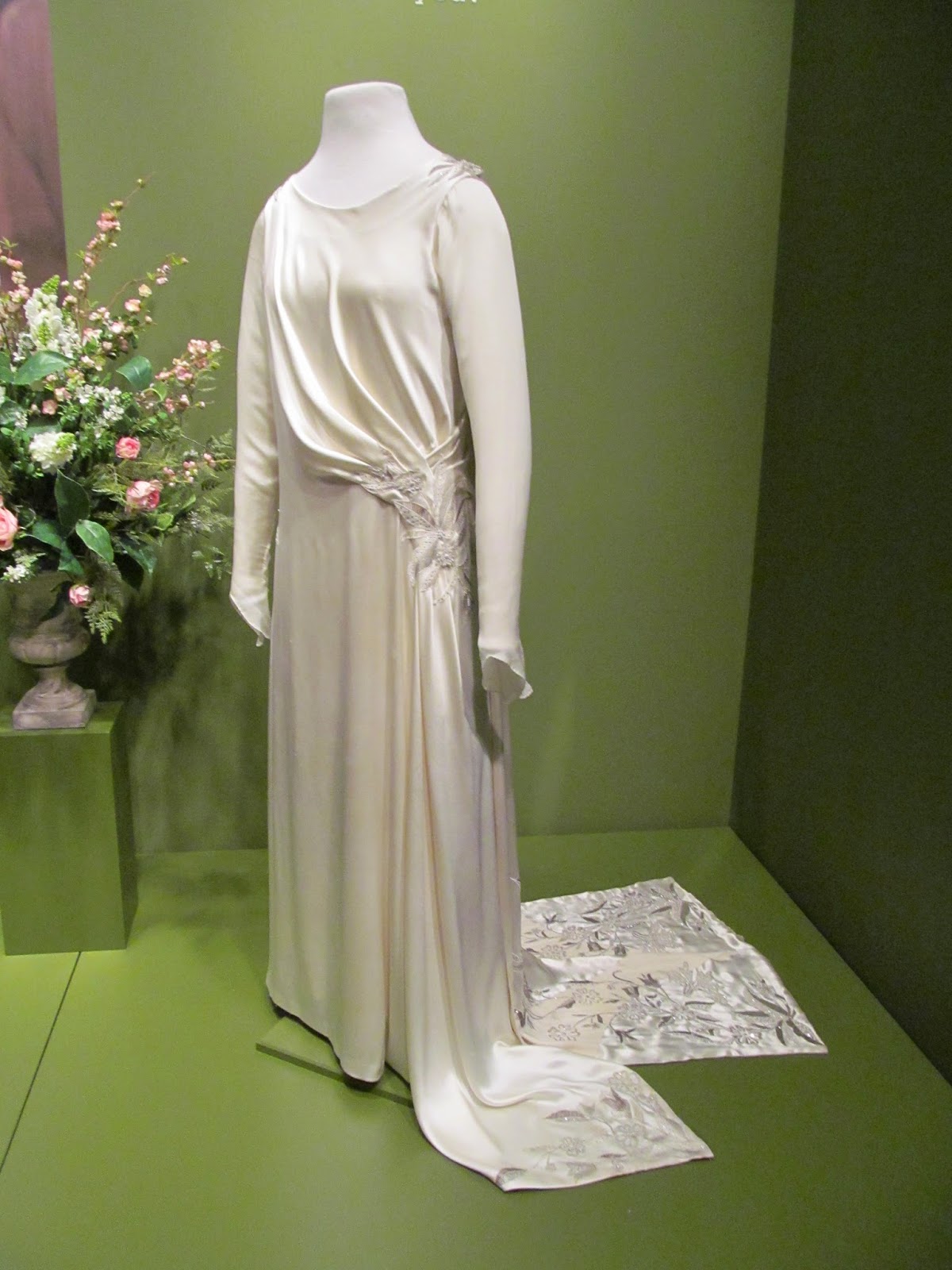 And another favorite - the Egyptian print on Daisy's apron.   (Fun fact: Highclere castle - the real name of the building where they filmed Downton - was the home of The Earl of Carnarvon, who funded Howard Carter's expedition which found Tutankhamen tomb and ignited eypytomania in England.) 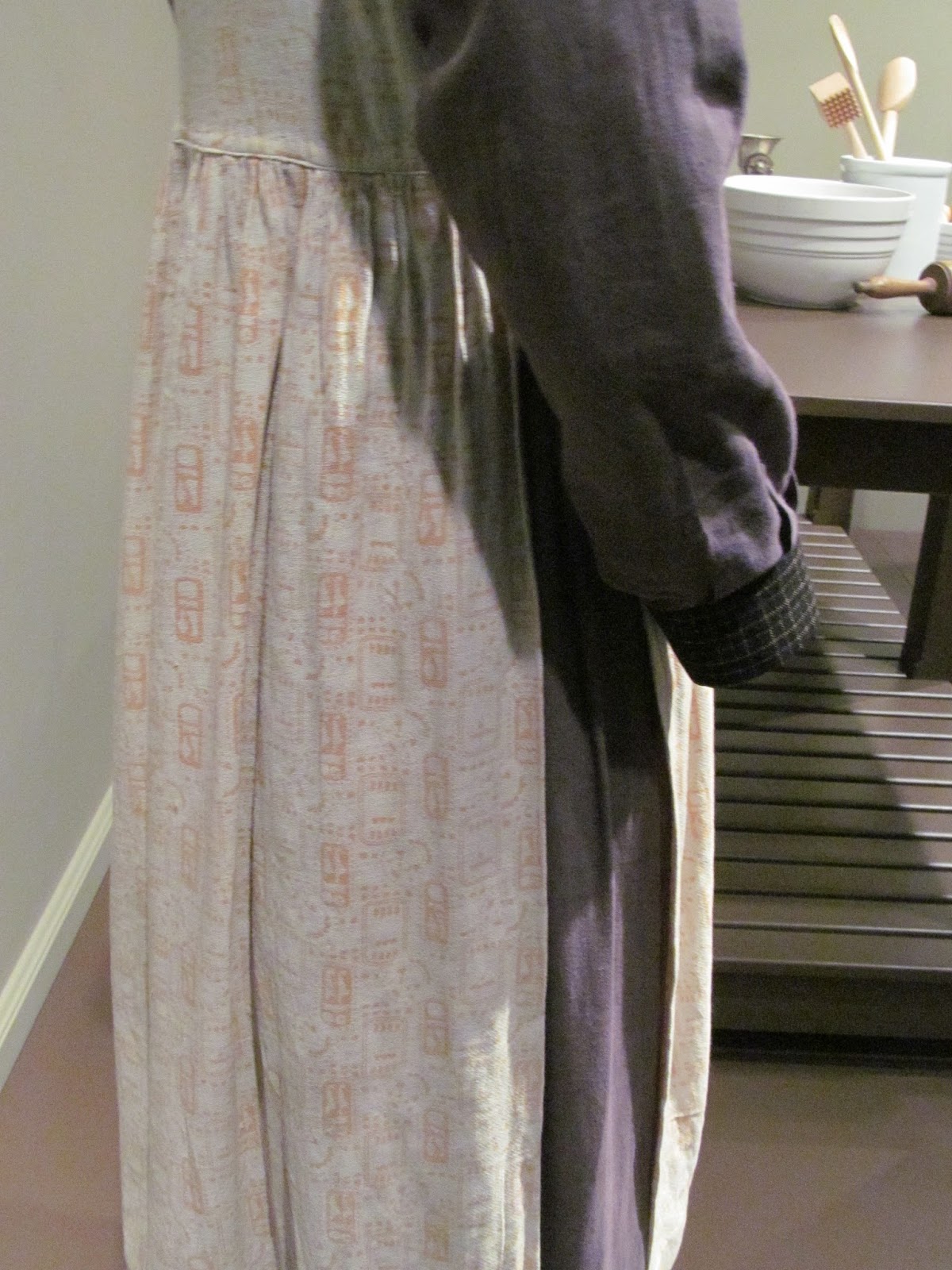 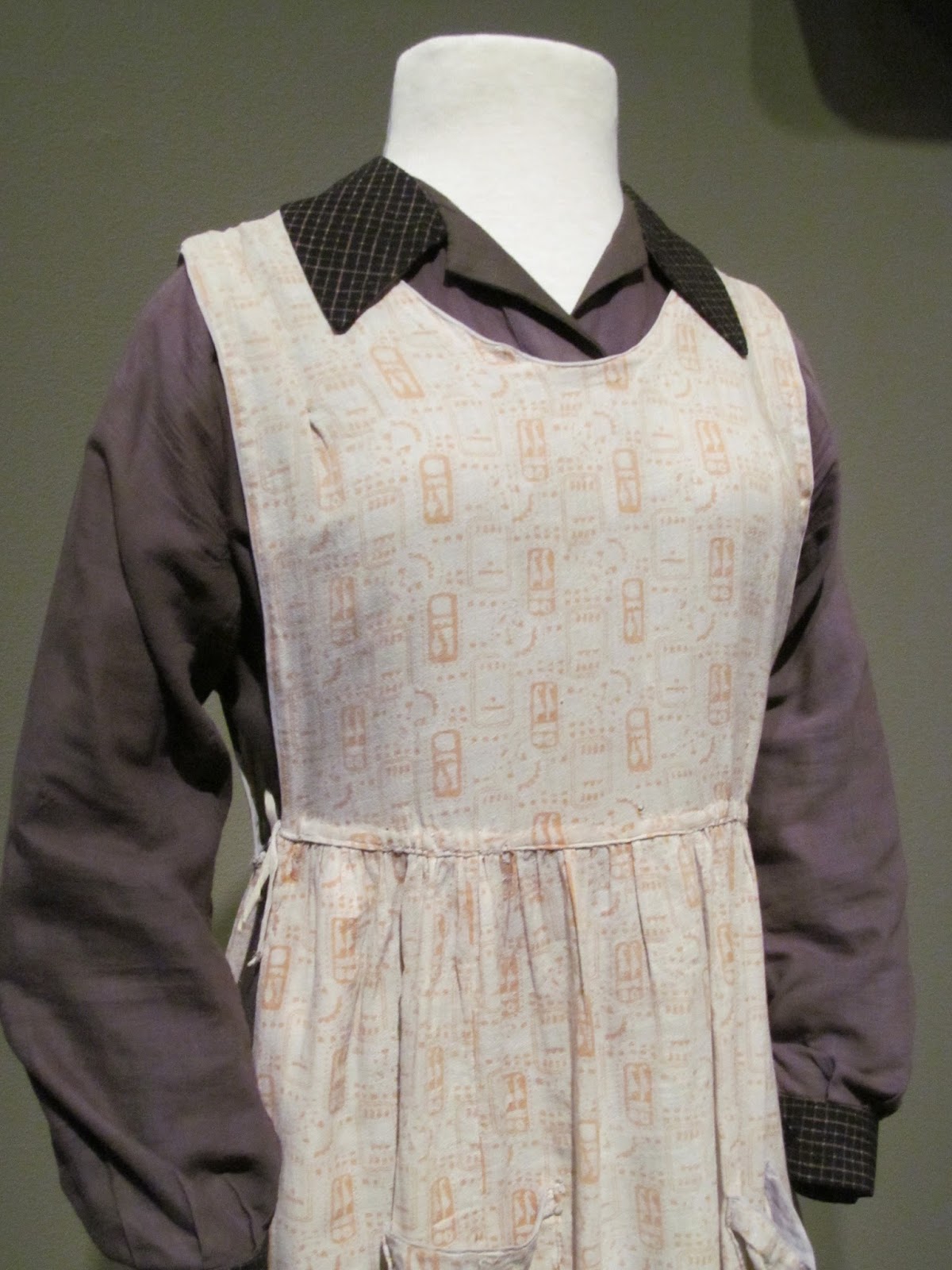 This probably isn't a surprise, but Sybil's harem pants have a satiny looking lining under the chiffon. 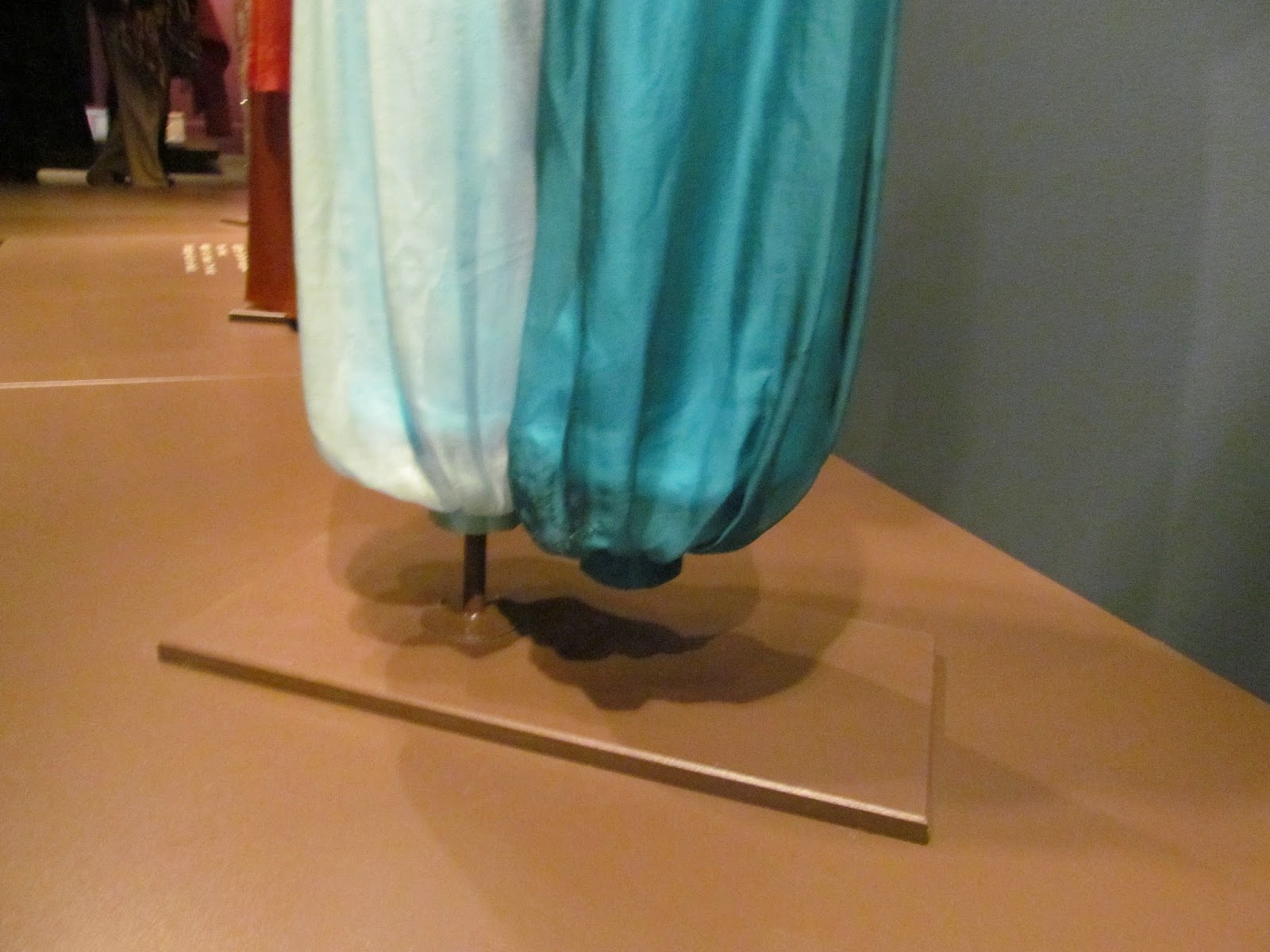 And, finally, the detail that seems to have taken the most work with the least chance of being seen - the trim on Mary's engagement dress. 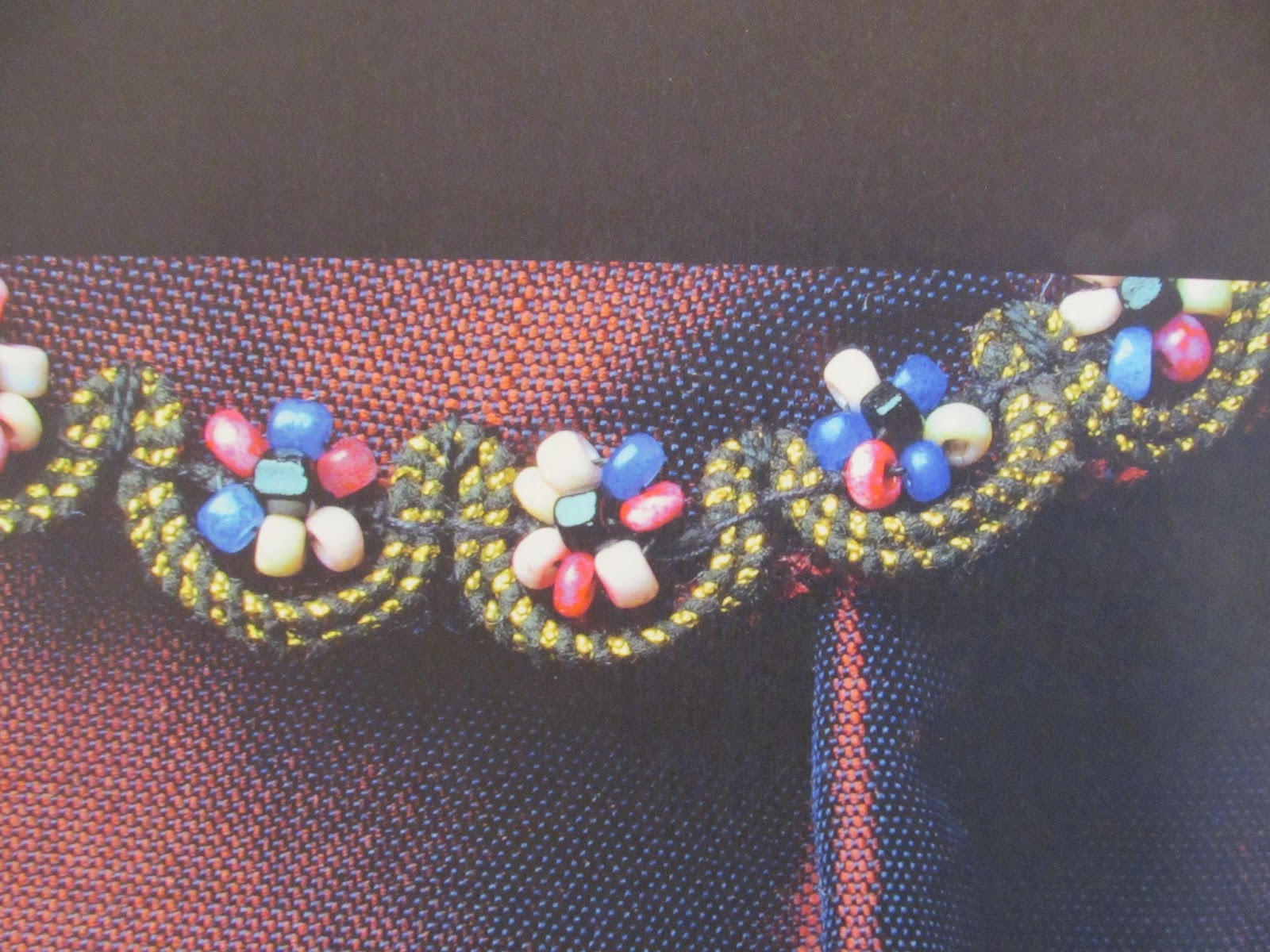 What I thought was just plain gold trim on the scallops (I have to admit, I hate scallops) (not that anyone asked) is actually multi colored beaded flowers.    the picture above is from a poster on the staircase - the lighting by the engagement dress was "romantic" with screen projections of falling snow and the scene playing in the background.  All very lovely, but not beneficial to capturing the details. 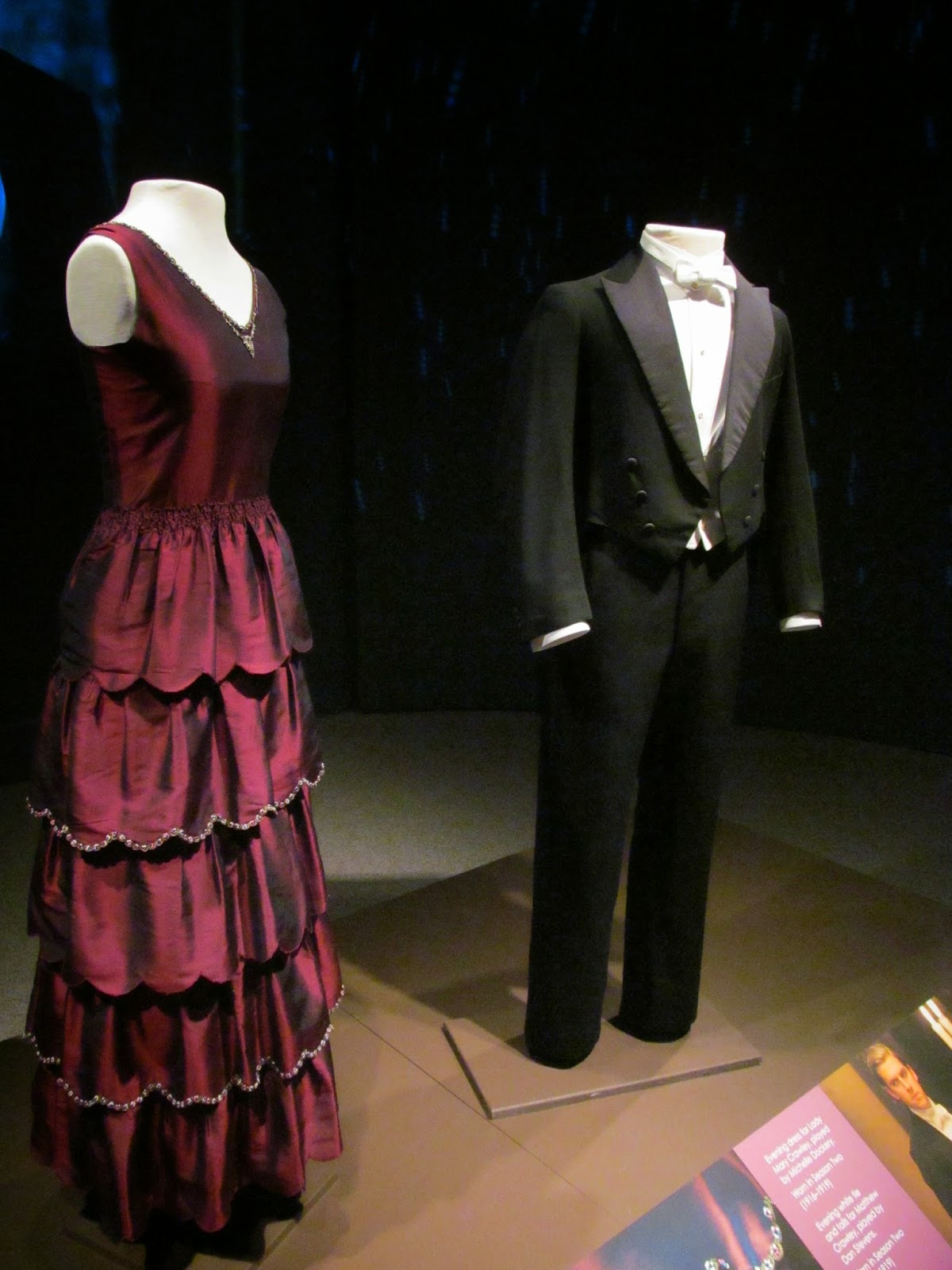 All in all, I had a really good time there - but I will say the exhibit was a lot smaller than I'd anticipated.   There about 27 costumes there and about half were set up so  you could see their backs.     Its also important to remember that these are costumes, not real historical garments, so they don't really stand up to a close inspection.   (Not to say the aren't lovely -- but some things which look stunning on film are rather underwhelming in person) (The dress Mary wore to Sybil's wedding in particular -- there are a lot of weird pulls and the belt loops don't seem to have been sewn on correctly).

It took me about 40 minutes to go through the exhibit (The ticket window is for two hours) and afterwards we wandered around on the grounds of the estate for a while.  Winterthur has lovely gardens - if you come from any significant distance, be sure to plan for the spring or summer when everything will be in bloom. The garden and house are worth a visit.

As for just seeing the costume exhibit,  I'm close enough that we were able to go there an back in an afternoon, having both lunch and dinner in Philly on either side.   I don't know that its worth coming from much further away if you aren't going to see anything else as well.

~More on all the fancy evening wear in another post. ~

Posted by Allison at 2:55 PM No comments: 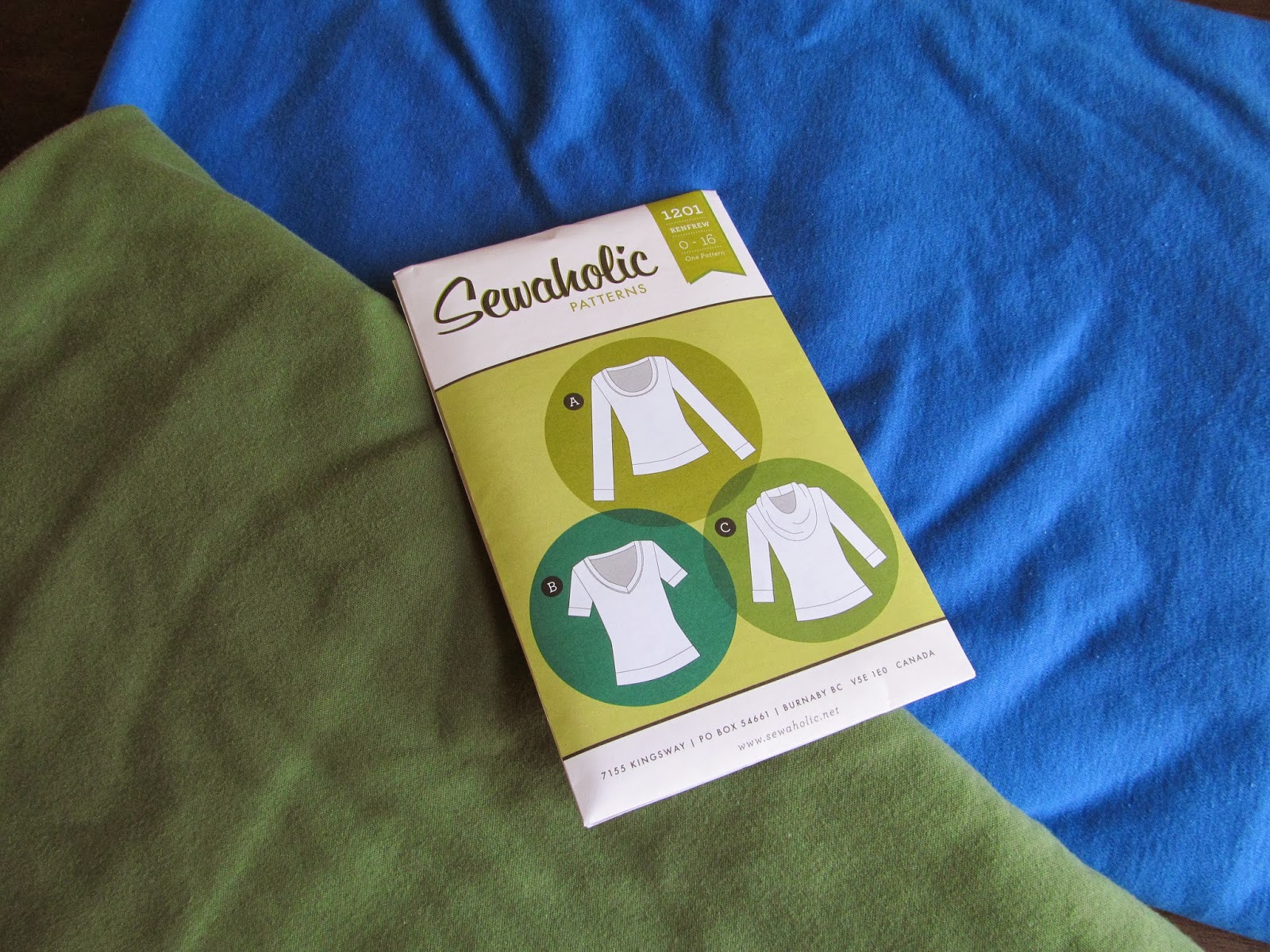 I've come to the conclusion winter is never going to end, so I've temporarily put aside my lovely pink dress and will be making more warm things.

(Even the early morning sunlight is all wintery and dull)  (It knows.  It taunts me)
Posted by Allison at 8:05 PM 4 comments:

The problems of going rogue 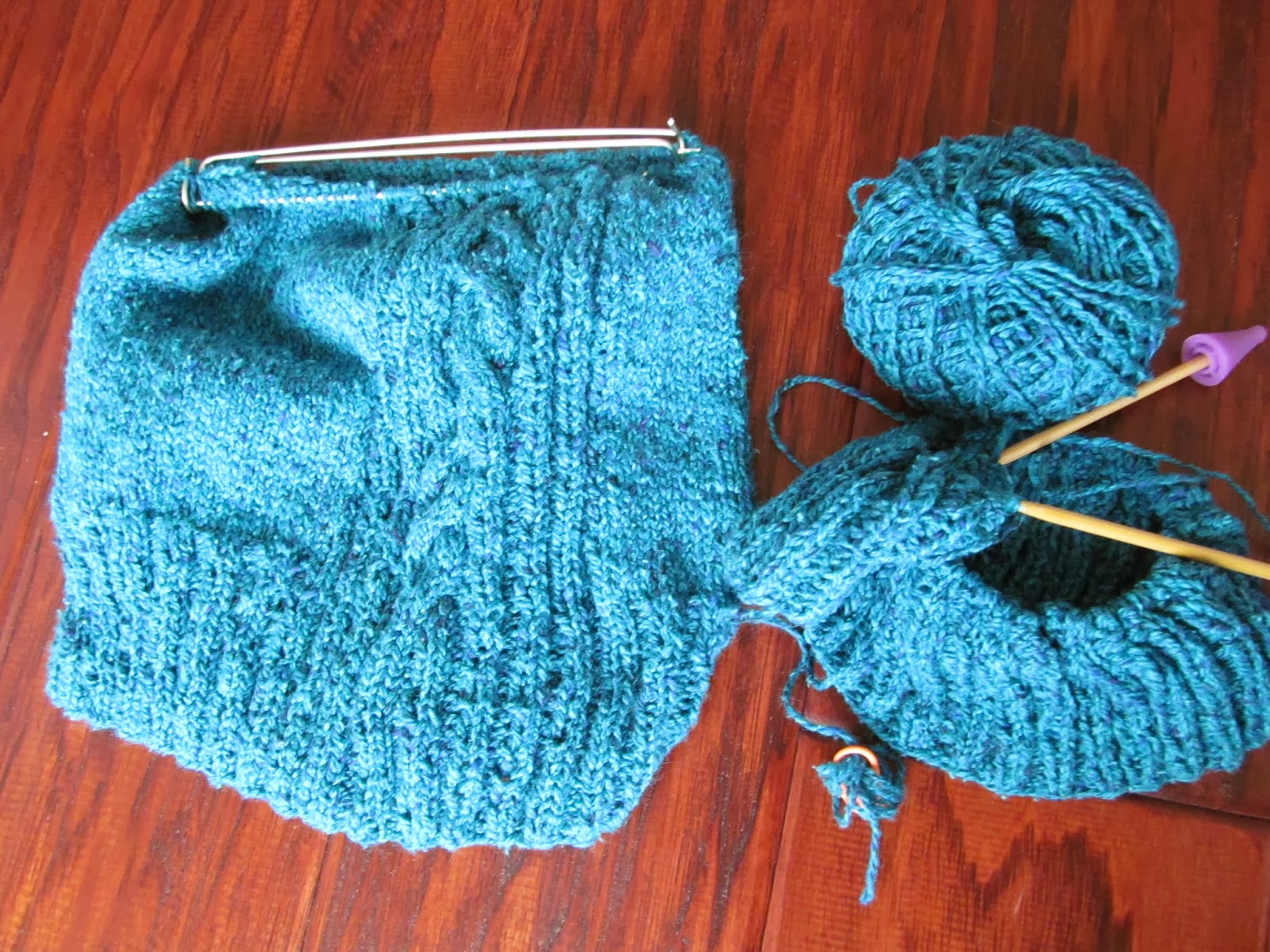 Happily knitting away on my sleeve, when I noticed I only had three skeins left and no sense of how much I'd already used....   So I promptly stopped and am knitting the other sleeve to match.   Once they are the same size, I'll divide the remaining yarn in half and hope for the best.... but things are looking a little short right now.

::fingers crossed this doesn't end up being totally ridiculous::
Posted by Allison at 9:11 PM 3 comments: