Does anyone else find themselves perpetually sewing things wildly out of season?

Granted, I currently have five projects ongoing (just counting the ones for me.)  (I'm getting really bad about taking pictures.   Almost half the things I made last year didn't get blogged -- but I should be moving again over the summer, and when I have a better space, I'm hoping to take more pictures.)

Anyhow - back to the main point -- I find I'm either sewing for a deadline, and finishing with moments to spare, or sewing for the sheer joy of it, months out of season.   Such is life.     Back to the dress - it is cotton gauze, and will be lovely in summer, but for right now is mostly just mocking me with its sheer floatyness.

It is a variation on V9053, the variation being I didn't have enough fabric and had to make up my own skirt.  So, rather than the large (seriously, HUGE, it requires 60 inch fabric) trapazoidal panels, I used gathered-but-smaller trapazoids with godets.


I'm slowly making my peace with gathered skirts.   I've found if they hit me in *exactly* the right place and the hem is much wider than the waist *and* the fabric something that won't bulk up, they are maybe not the heinous demons of unflatteringness I've often found them to be.

I'd go do far as to say, I think this dress will be  favorite over the summer.    I already find myself wearing it to dance around the living room and while imagining I'm tremendously glamorous, so it has that going for it.
Posted by Allison at 3:09 PM No comments: 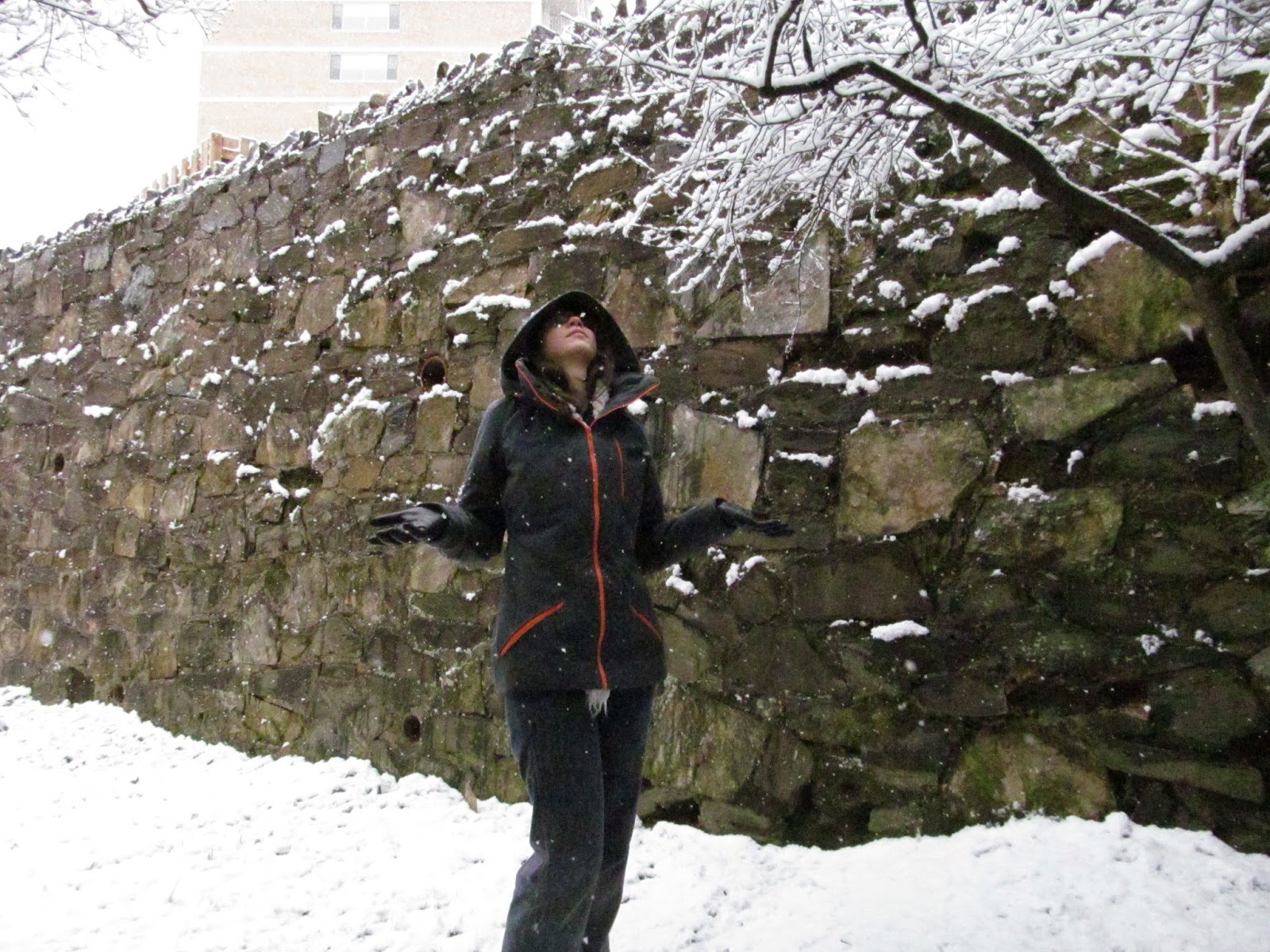 Just in time for the snow. 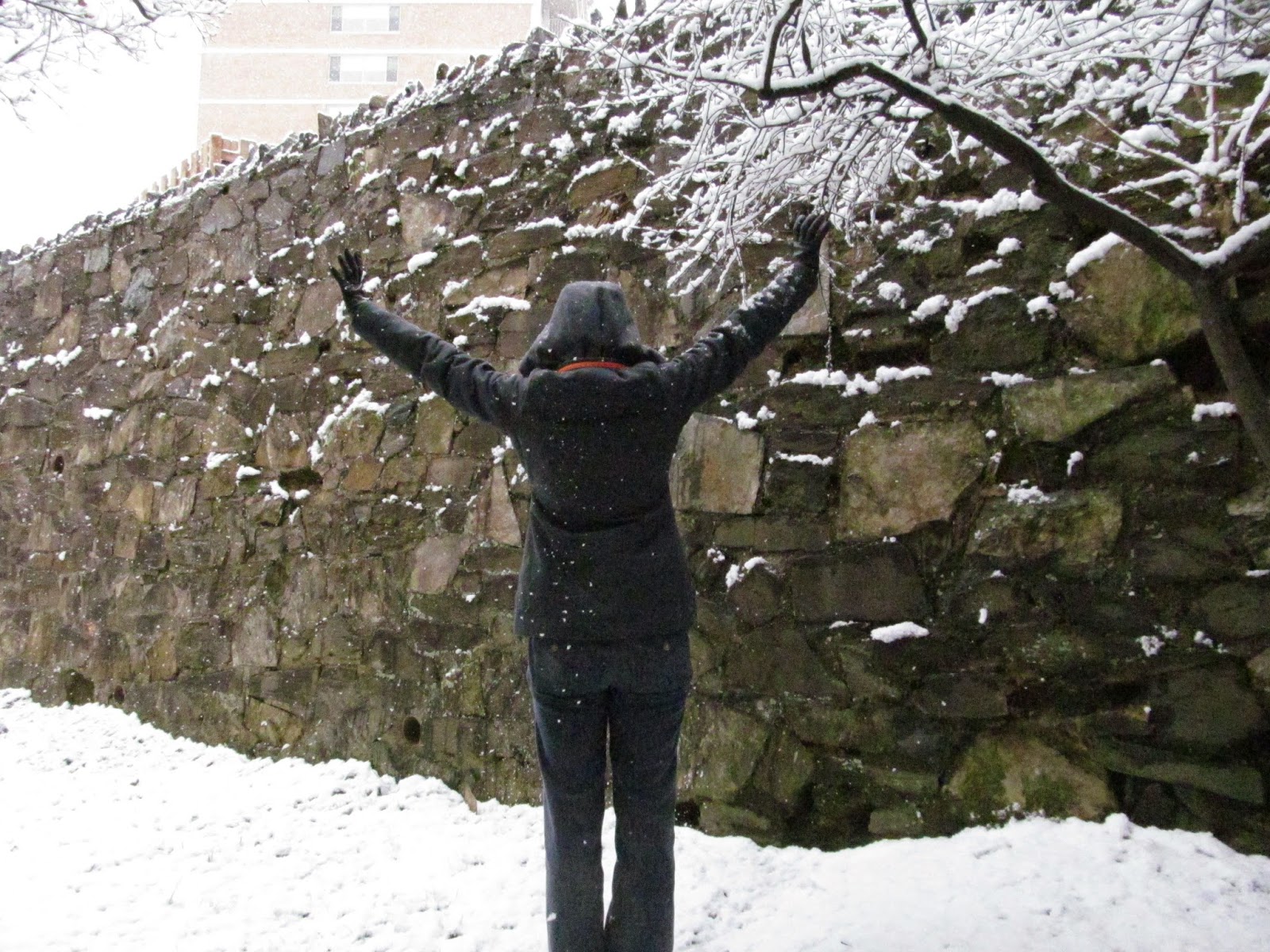 My minoru is finished! (about three weeks ago, but I've apparently turned into a giant blob of doom)   As usual, I went a bit rogue.   Most notably, I skipped the elastic in the back - I'd actually put it in, but with the extra puffiness from the thinsulate, it looked weird, so I took it right back out.

Side note: working with the thinsulate was a pain in the butt - if you ever choose to use it, quilt the fuzzy side before you use it.  Otherwise it catches on everything and picks up lint and dust and whatnot..

Other changes include wider sleeves, as I really like being able to bend my arms.  (Mostly a thinsulate thing, but also a pattern thing - I think since I knocked down about 6 sizes to get the ease right the sleeves were made to fit the size person it was actually intended for.)  Also longer sleeves, as I ditched the elastic cuffs, the outside pockets and a three-piece, lined hood.  (The hood changes were purely stylistic.  I thought it looked snazzier with two sets of top stitching, rather than one down the center.) 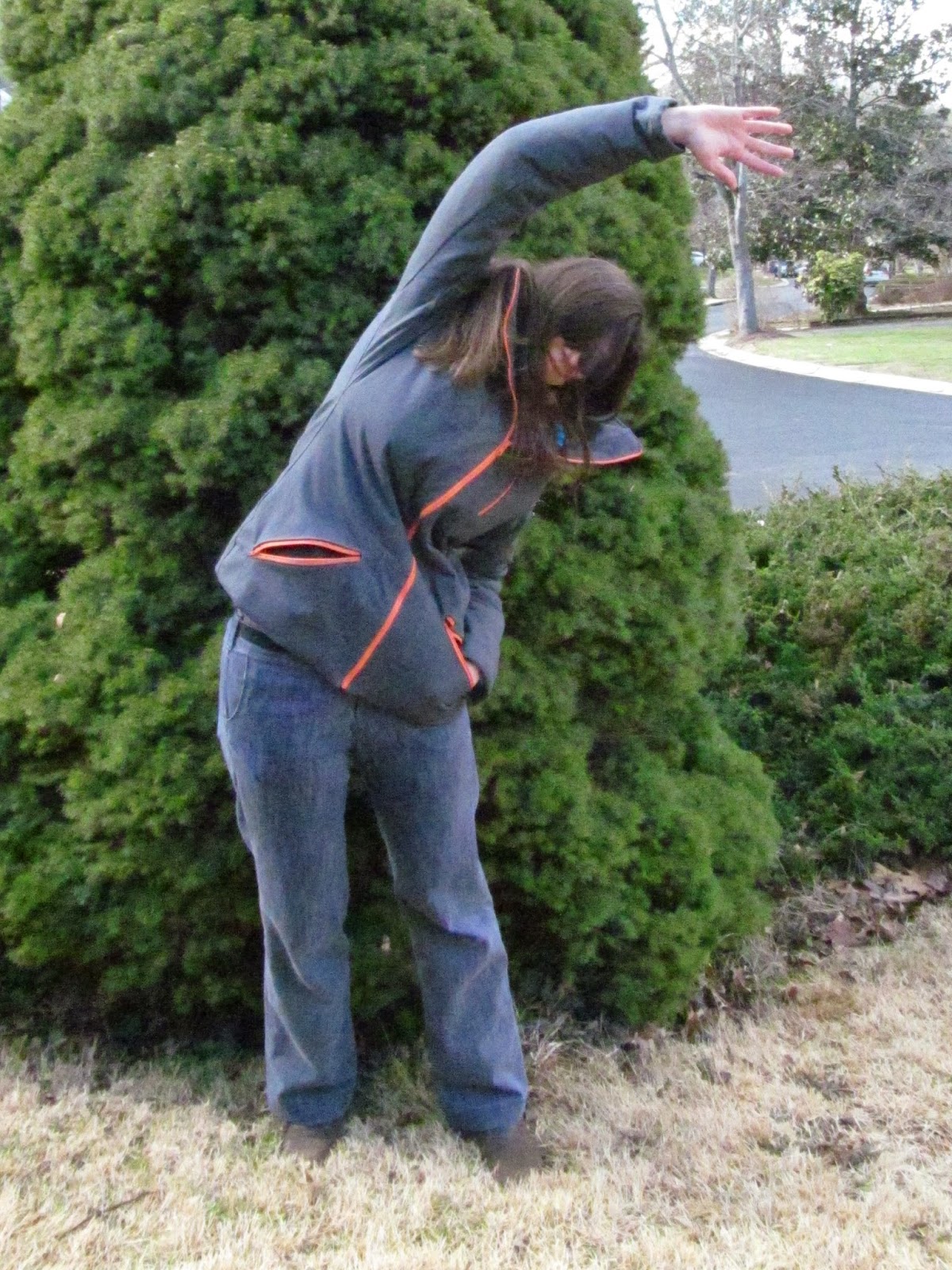 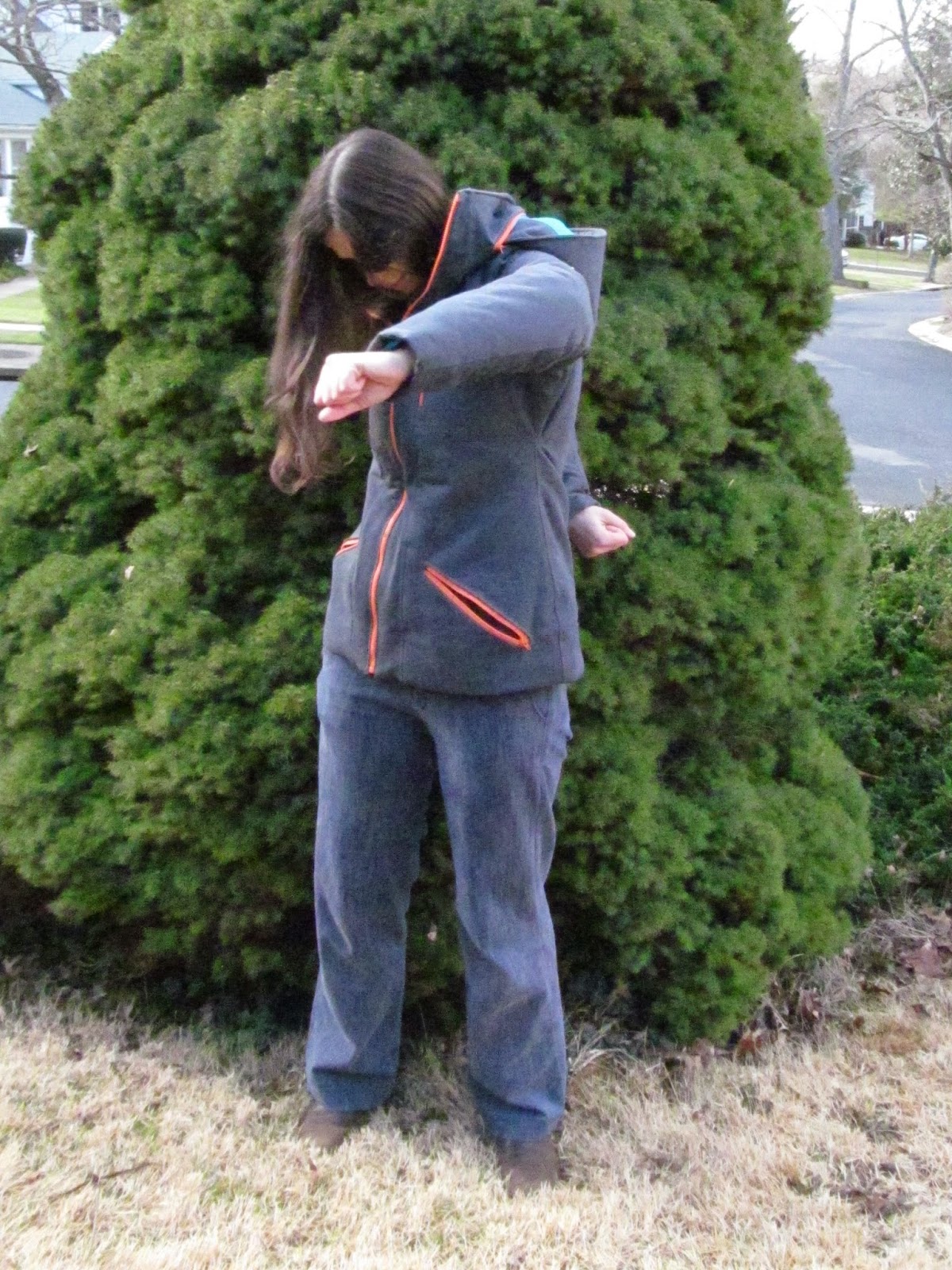 Despite the size reduction, I still have a full range of motion.  I haven't tried a cartwheel yet, 'cause the ground is cold, but I feel confident I could if I felt the need. 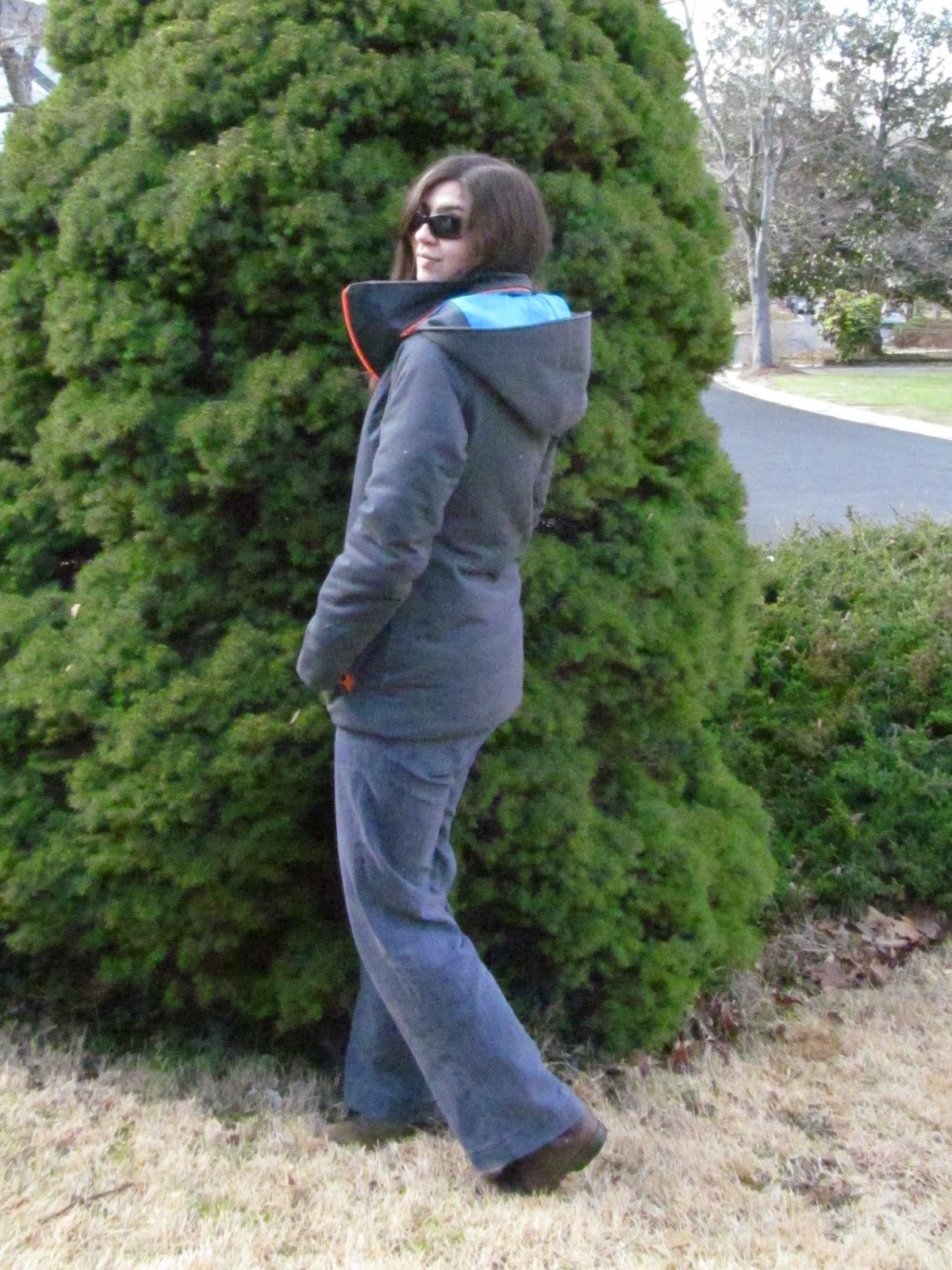 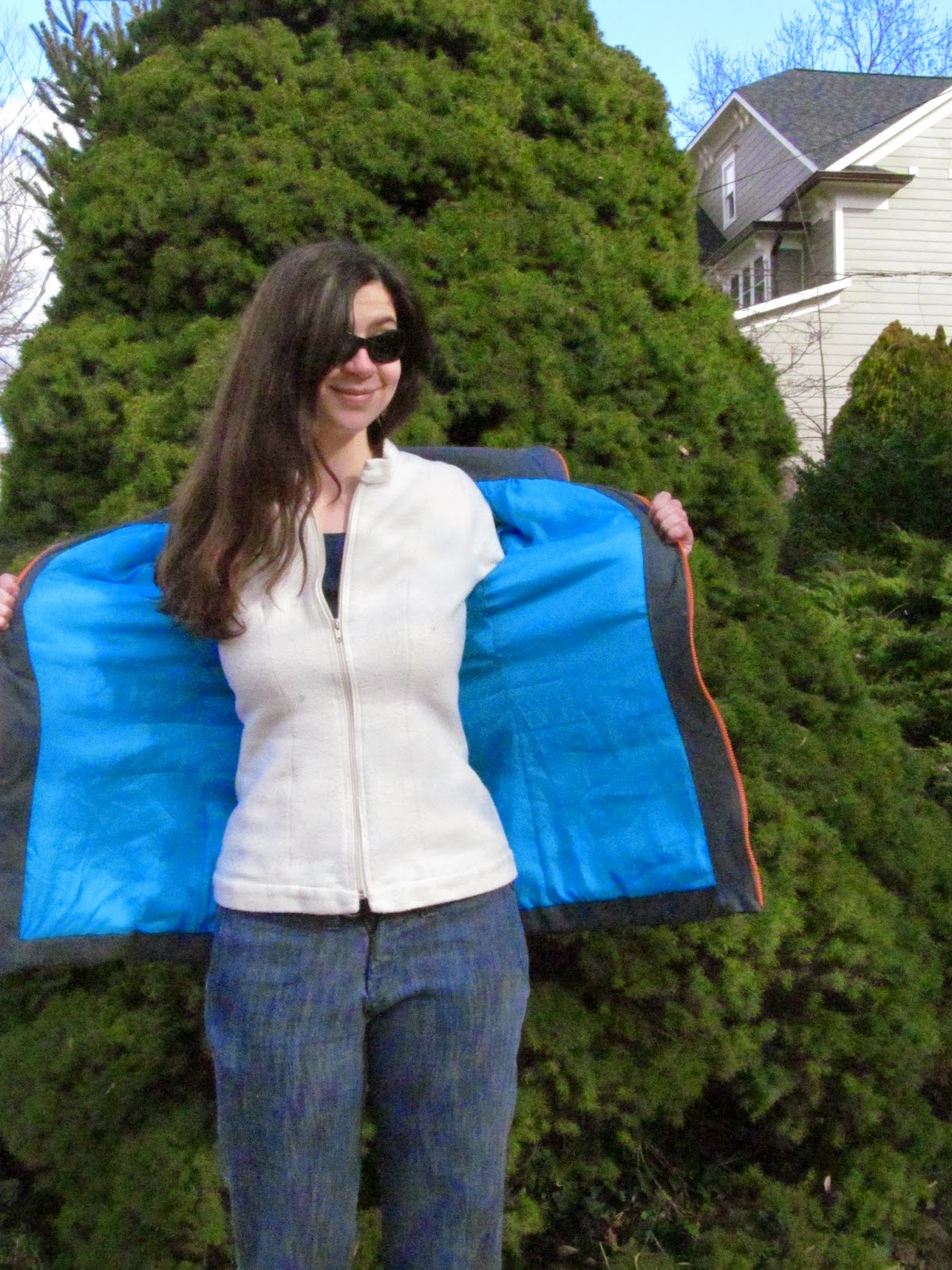 The one major criticism I have is that the hood doesn't cinch down.   My next version (and there will be a next, although not for a little while) will have a cinchable hood.)  It keeps blowing off in the high winds and leaving me with a chilly head.

Posted by Allison at 8:55 PM No comments: