For reasons even I don't understand, I decided that *this year* I was being an ear of corn -- it's been floating around in my head for a while now, and for one reason or another I never quite got around to it.

The original plan was a yellow kernel-studded hood, with a green robe, decorated to look like leaves, so my arms would look like a half-shucked ear.

When it came to actual construction, I just sort of started screwing around.   Odd decision number one:  It is construction entirely of tulle (35 yards, to be exact)  the original plan called for cheapo cotton and a sort of cartoony look.  However, I knew I was going to attend multiple events, and that it was going to be nearly impossible to clean.... so for whatever reason, I decided tulle is plastic-y, I could hose it off and be ready-set-go for the next party.

The costume is based on a poof, pinned to my hair, which eventually developed arm holes, a face hole, and layers of upon layers of leaves.   The first set of kernels continued the sort of cartoony aesthetic (see first image below) but those few kernels used up almost all of my 10 yards of yellow (10!!!!!!!)  so, they got pulled apart and turned into the series of loose loops I ended up using for the final version.

Another 25 yards of tulle later (for a sum total of 35 - I know - but you wouldn't believe how much fun it is to frolic about in) I had a corn costume so artsy, no one could guess what I was supposed to be.

HOWEVER - once I'd explained what was going on, most people dissolved in laughter, which I count as a win (and I won the costume contest, which is a more objective style of win) (double win!) 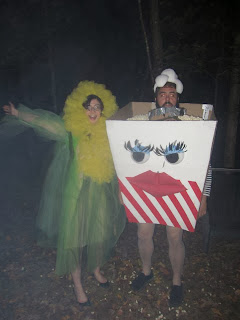 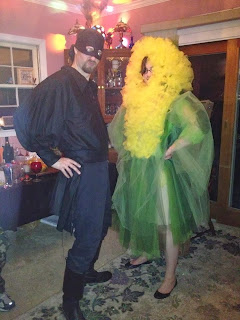