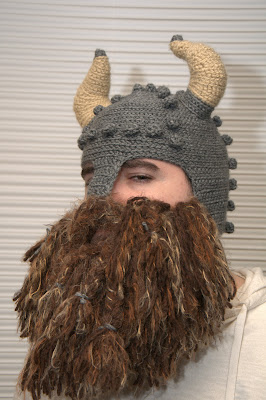 Ever since I made it, Kel has been overwhelmed by the utter glory of my beardhat.  (roughly translated: kept stealing it and stroking his chin)


When we were looking at all the others the internet had to offer, he kept commenting on the horns and the braided beards (I know the yarn is nuts, but there are 9 braids on the top layer of that beard) so when I (most secretly) made his this past week, I added it all in. 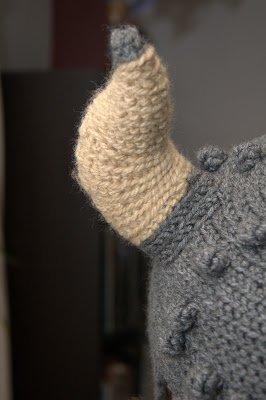 The techniques for the hat and beard were basically the same - lots of popcorn rivets, a crocheted base and individually tied 'hairs'.  The interesting addition this time around was the horns - I started off with a couple of rings of single crochet attache directly to the helmet - then I moved to the horn colored yarn.  I started with a single round of single crochet, and then moved into shaping.  The top side was single crochet (and half and sort of pull through - I don't know the technical names for a lot of these and seem to be too much of a bum to look it up properly) moving to double on the sides and treble on the bottom.  This let the horn curve up -- the I did a round of equal (I think single) stitches, followed by doing the exact same thing, but curving the other way, reducing the whole time as I went.  Then I switched back to the 'metal' color, as what self-respecting helmeted-dwarf doesn't tip his horns in metal?  (What about the ladies?   I'm invoking Terry Pratchett on this one - All dwarfs have beards and wear up to twelve layers of clothing. Gender is more or less optional.    --   There was no such thing as a dwarfish female pronoun or, once the children were on solids, any such thing as women's work.) (What?  Trust me,  go read Terry Pratchett.  Go.  Now.   Scoot.  I'll wait.) 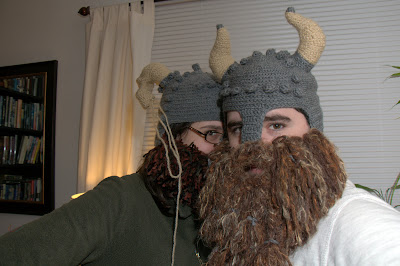 Needless to say, I got jealous, and am now part-way through adding my own set of horns.