This could also probably be called the emotional roller coaster dress --   while cutting : OH NO! last time I made this I added in an extra few inches with pins and chalk before I cut!  Then: AHHHHHHHHHHHHH  I also added seam allowances!!!!  holyshit holyshit holyshit   Followed by: I put it together in the wrong order!  Must rip seams!  Followed by, I don't think I'm making it in.... who has my proportions but is smaller  ::starts mentally going through all her friends' body types::  Followed by success! 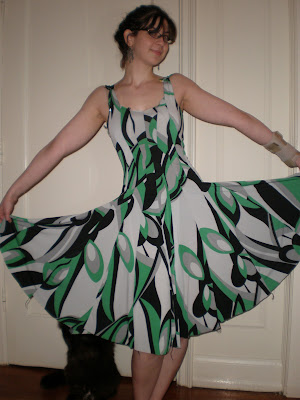 See, even Penny agrees -- although she may be trying to eat excess string rather than stand in awe of my creations.  Even odds either way.  Anyhow, this is the second time I've made this dress -- its a self drafted pattern  based on a wedding dress by Alabama Chanin.  The original (mine, that is) is by far one of my favorite pieces and I've been meaning to make another for a while now.    I still need to add seam binding of some sort to the neckline and armholes, which I'm thinking should be black knit of the same weight so that I can use the same thing to add an inch or two onto the hem without it looking funny.    Right now, there is enough unevenness in the hem that were I to hem it as it is, it would be right above my knee, and I just don't like the aesthetics.   Besides generally having bruised up child-knees, I think longer skirts better balance taller people.

some random putting it together shots - I love the fabric :)
Posted by Allison at 12:15 AM