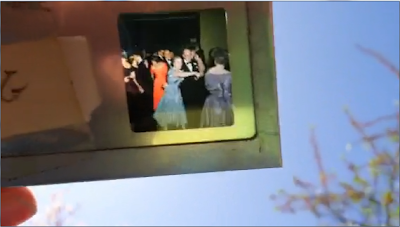 I was home this weekend and spent some time digging through boxes of old pictures and managed to unearth a few of Meema's dress in action.   Unfortunately, most of them are black and white, and the only color shots are from the '3D' slides which don't scan properly.  (I also tried projecting the image onto the wall, but that didn't work out so well either...)  Anyhow -- see the woman dancing in the middle of the slide?   That's Meema and her sky blue dress. 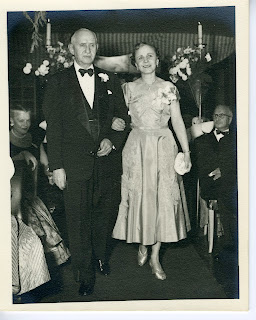 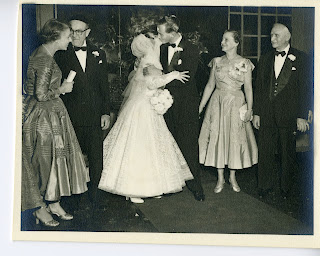 For family reading this:  Nana, Garky, Grammy,Chiefy, Meema and Grandpa George.
For everyone else:  Look at the woman 2nd from the right in the first picture and, well, the only woman in the second.   That's the dress I'm going to be copying (and if you click at the link at the top, you can see it fits me fairly well) 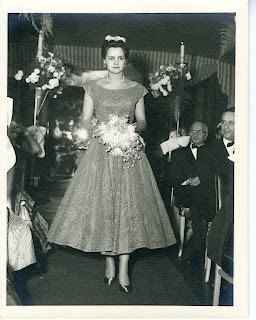 At this point, I got a little scan-happy, but go with it, because the pictures are awesome.    This is Grace, my grandmother's maid of honor -- not only is she in a marvelous dress of her own, but check out the serious expression.  She is concentrating like crazy on not dropping the flowers on her head.  They arrived from the florist without a clip to hold the little coronet to her hair, so she just had to balance it throughout the entire wedding. 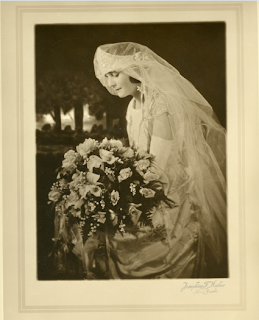 Now we go further into history -- we were on a wedding theme, so here is Meema's wedding, from 1921.   I don't know much about the dress other than what I can see from photographs -- but there was a lot of embroidery or other embelishment of some kind on the skirt. 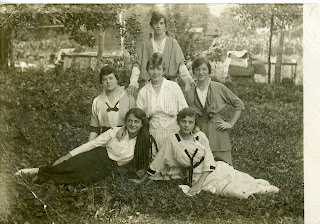 Although this picture isn't dated, from the outfits, her face and the fact that she was born in 1900, I'm putting this picture at around 1915.   Check the hairdos.   (Meema is sitting, front right in the white dress with black trim.)  So, not only do a couple of girls have crazy faux-hawk poofs going on, the other reclining girl has basically *all* the curls.  That's not just loose hair -- that's hardcore ringlette action. 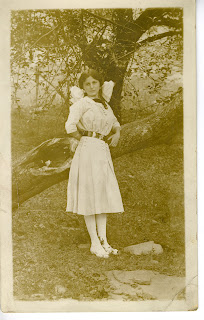 Also undated, but once again from her clothes I'm putting this one closer to 1910, although she looks more than 10 years old.  Maybe we should nudge this to 1913 and push the other to about 1917...

Either way, I thought they were fabulous and growing up with the century she had some amazing clothes, and happily, we still have a lot of the pictures.
Posted by Allison at 10:52 AM

Email ThisBlogThis!Share to TwitterShare to FacebookShare to Pinterest
Labels: history