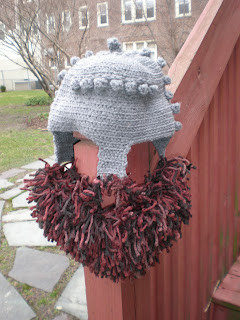 Behold... the helmet of glory!  Its rivets of justice!  Its beard of doom and contemplation!     Mighty Dwarf smiths did forge it in the depths of the earth from the purest of iron, quenched in a glacier and be-bearded with a yak. 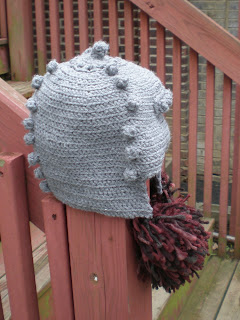 Either that or I got some yarn and started screwing around.   I'd seen a couple of pictures of  knitted helmets and beards and whatnot and decided to give it a go.   Mine is actually crocheted, as I was in a single needle (hook?) mood and it doesn't use a pattern.   I started with a knob, then started doing an expanding circle until it was about right and did a bit less expansion, for shaping, and then just continued, cylinder style.  (I know, I can't get over the technical accuracy of that one either.)  Anyhow - the rivets are popcorn stitches - the knob is the whole hat in miniature and the shaping of the nasal-guard is totally free-form.

Its hard to see the interior, as the fluff of the beard more or less consumes all things in its path - but the base is just standard double crochet, with a split for the mouth (mustache/beard/awesomeness)  then I took about a zillion (conservative estimate) little pieces of yarn and knotted them on, individually, to the loops in each row of crochet.  For the mustache, I used half-length, in the hopes of still having access to my mouth.

All told it didn't actually take all the long.  I started it Monday afternoon, finished Thursday morning, and in that time also did all sorts of holiday things, plus an exciting plane based adventure in which holding pointy objects was inadvisable. (When the pilot comes on the intercom to say we're taking a detour to avoid tornadoes, well, it adds spice to travel....)  so, lets say about 30 hours.