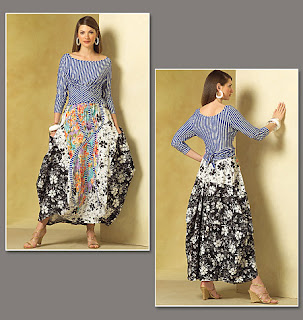 I've had V2971 knocking around in my pattern collection for a while now - I really liked the wrapped shirt, but I never made it as I knew that something that ended so close to the natural waist would look terrible on me.    I've always envisioned it as a dress -- but not by connecting the skirt that comes along with it (an odd beast, that) but by having a regular skirt come down and have the wrap bits tie over, just as they are intended.   Every so often I would think about ways to ended the ties, turning it into a sort of wrap dress, but it always seemed like it would (a) come open and start flapping about  (b) be awkward with the under wrap having to come through a hole somewhere and c) take an enormous piece of fabric, as the skirt would be cut on the bias and the center is supposed to be on the fold.


Then the other night, I realized I could use layers.... (obvious in hindsight, but there we go)  If instead of trying to attach the skirt to the side bits, I just doubled the back, extended it into a tunic type thing and popped the wrap front over it.... then everything would work out perfectly.

So, I extended and doubled the back, and whamo, blamo, dresso!  Otherwise everything else about the pattern stayed exactly the same.    Pictures of putting it together tomorrow (battery charging issues....I need battery elves. Actually I could use several elves - I'd be more than happy to make them tiny clothes.)