Greetings!  Yes, its been a while.... I managed to thoroughly screw up my knee and was basically useless for a couple of weeks.   Anyhow, I return, although this post is being sabotaged by a certain fuzzy beast, who seems determined to help me type.  I'm fairly certain independent use of the keyboard offends him.

Anyhow, as the miscreant has finally settled down....  bra fitting!   Forever ago, I got the book 'Bare Essentials' by Matthews and Fairbanks and have been puttering around with it.    After getting my act together and acquiring the right under-wires, I took another stab at it this past week. 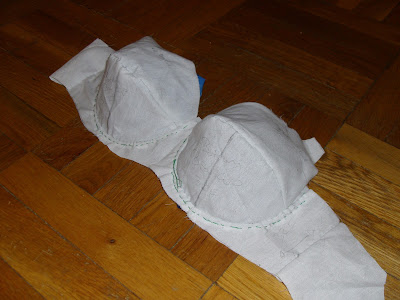 The basic pattern (included in the book) came together very easily, but produced a somewhat wedge-shaped cup  that just wasn't what I was going for.   Now, later chapters in the book discuss shaping the cup in multiple pieces (this is only two), how to draft your own, specialty types (nursing, mastectomy, strapless, etc)   However, being me, and being impatient and not being in the mood for math, I went for duct tape.

Basically, the name of the game is to tape your breast in the position you want it (I made a masking tape shield first, so the adhesive wasn't on any of the tissue) and then use the form to make pattern pieces. 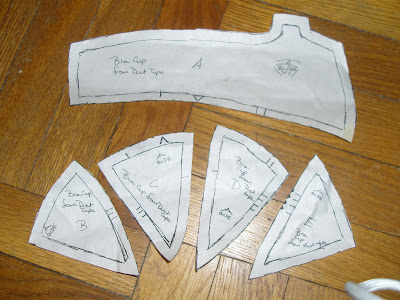 Rather than redo the entire bra pattern, I used the band pieces from the previous endeavor  as the cups were basically the same size - just a new shape. 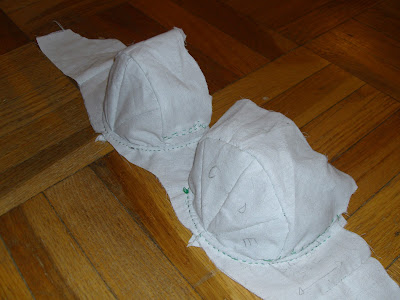 As you can see, the result is much less pointy - however, when transferred back onto my body there was a bit to much fabric at the top , so I pinned it down in a demi-plunge (really name, anyone?). 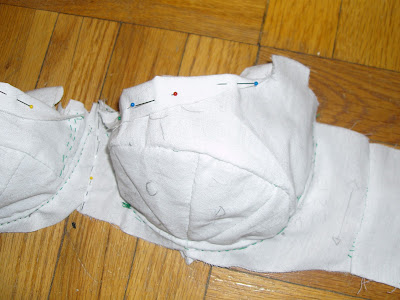 The result is the most comfortable thing I have ever worn.   It is a smaller band size and larger cup size than my current bra, and lets the bridge sit right on my sternum and the band lies horizontally across my back, parallel to the floor.  I wore it all evening and it only pinched when I was hunched over in a rather ridiculous position - otherwise, it was fantastic.

I spent a lot of time fussing about under-wires, and contacted Norma of Orange Lingerie, who advised me to bend them around my rib cage - its amazing how much difference a small bend makes.  Instead of a single, almost fulcrum like pressure point, the wire distributed its pressure evenly.   (By the way - she has a book coming out next month on bra-making.    I'm pretty excited to see it.) 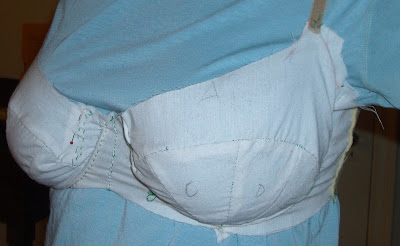 There are still some odd pulls in the fabric, and its not quite as supportive as I would like, so I am going to keep tinkering, but all in all the whole process was a lot easier than I'd anticipated and went together really quickly.

My current plan to so add length to the band all the way around - not to the point of a long-line bra, but about an inch, both for seam allowance and to give the band more space to be supportive.    (I swear, its like building a cantilever)