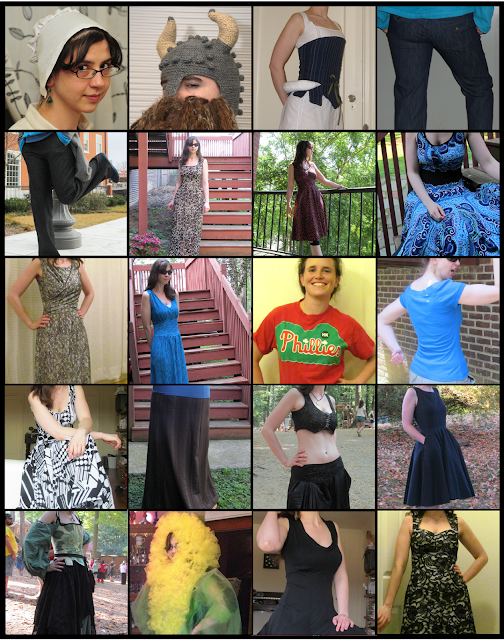 Finished makes of 2013:
Nine dresses, two pairs of pants, one shirt, two hats, four costumes, one skirt and a patch-over

Unfinished:
One quilt, one coat and a solid handful of dresses.

General Thoughts on 2013:
last year I had 26 finished objects - this year were only 20 - not bad, but I think there were a few too many aborted attempts or items I lost interest in.   On the other hand, this year also included a major injury, some significant life changes and a hell of a lot of traveling, especially lately.  So I guess it evens out.

My primary goal for the year was to make a bra - Got through the muslin stage, but it has fallen into the great UFO pile and needs to be picked back up.   I also wanted to conquer knits, and with four knit dresses and two shirts, I'm feeling pretty good about them.

Plans for 2014:
-Finish the damn coat (all it needs is trim and a zipper)
-Baby blanket for the Steglette  (current plan is a pink and blue mariner's compass)
-Umpteen zillion more dresses from stash fabric (because, really... I need more dresses)
-A couple more pairs of jeans (these I actually need)
-SHIRTS (really really need.)
-Generally using up as much of the stash as possible, while fabric and pattern stashing to the greatest degree possible.
-Taking better pictures - after all the time that goes into my makes, I'd like to do them justice.

*for anyone following closely, the black dress in the bottom row never got blogged.  Most of the pictures turned out weird and I'm waiting for sun and above freezing temperatures.*
Posted by Allison at 7:09 PM