Going through my wardrobe I found I actually have a few more shirts than I thought, but fewer pants. It comes from having made quite a few pairs of jeans (and notably a pair of gray cordoroys) that fit.... but not quite well enough - so I wore them once or twice, out of sheer perversity, but now all they do is hang in my closet taking up space. They have now been moved to storage as I reassess my wardrobe as a whole.

This week has been busier than usual, so I'm hoping Saturday will see the jeans finished and at least one of the shirts done. (The jeans are nearly done as is, I made them up from my sucessful pattern, but seem to have but the back about a half an inch too narrow -- it seems to have been overzelous serging and knife work -- so I am adding in a panel on the sides of the legs set off by piping so its looks intentional. I will also put piping between the waistband and the main portion of the pants, to continue the "I totally meant to do this" theme (There wasn't enough to totally redo it and the store was out of that particular wash) 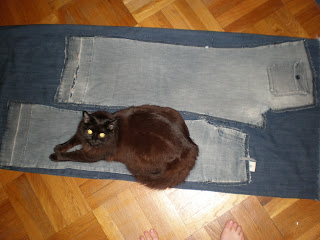 As I still need to find my camera charger, I offer older pictures of a pair of jeans I was making from the same pattern. (Gap ones I loved, wore until they disintegrated, and then copied -- with modifications -- as they are no longer made) As Penny features prominently (they do like to help me sew) I felt Goshu needed equal representation. 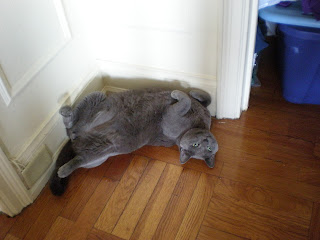