Horray and Huzzah, for it is the anniversary of my birth.  (I say this like I was in any way responsible.  Mom -- Thanks for pushing me out of your uterus!)

Its been a good weekend.  I had a party last night (which, inevitably, I have no pictures from. I don't seem to be one of nature's in-the-moment photographers.) and the theme was 'symposium'  -- I gave each person a topic when they rsvped and they had to present it in any manner they chose.  As the topics were whatever I happened to be thinking about at the time, and not a single person took it seriously, *and* one threatened to blow up my microwave while trying to make plasma from a grape, fun times were had by all. 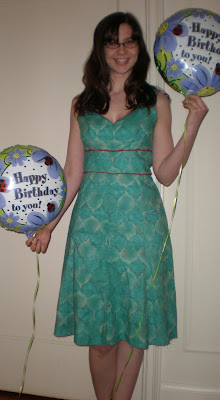 Then today, after an epic quest for pancakes and/or cheese steaks (totally worth it)  all guests were on their ways home and I was on my own and got to sew (and the sixth season of doctor who opened up on netflix!)  So here we have what I'd been calling the stealth dress, but I think we'll rename the birthday dress.

I've been working on it in fits and starts since November and it keeps somehow not making it onto the blog.  It's Butterick 5330, although I turned the double panel midriff into one piece.  It also represents my first major foray into piping -- I've done it once before and made rather a botch of it.  However, this time I tried using a proper piping foot, and oddly enough it turned out much much better.   I still need to attach the midriff and bodice, add a zipper and otherwise hem and finish seams.  I'd hoped I would finish it tonight, but after finding I'd left about an inch of gaping ease in the center front of the bodice (I'm really not sure how I pulled that off)  I had to rip out and redo -- and piping makes that all a bit tricky and nothing lies flat.   Anyhow.   It came together today, so birthday dress is shall henceforth be.
Posted by Allison at 10:59 PM