We're going to take a short journey to time and space back to the fabulous 50s, and the three dresses worn by two women in my family. The black and the brown belonged to my maternal grandmother (who is about 6 inches shorter than me and here after will be referred to as 'Grammy') and the white (once upon a time it was blue) belonged to my maternal paternal great grandmother (mom's dad's mom aka Meema) I'm not sure how tall she was, but I'm guessing around 5'2ish as well.  I'm the odd one out when it comes to height and the women of my family.   A lot of the men are tall... but I digress.... 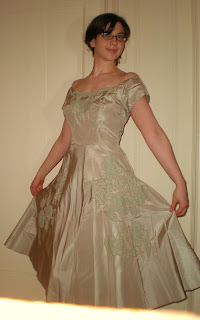 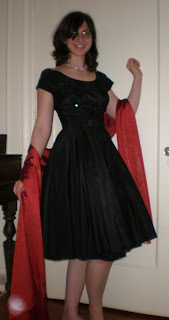 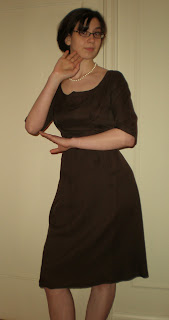 The fact that I can get into them at all shocks me -- they are tiny!   (however, in all honesty, I only ever got the zipper up on the black one once, and even then I couldn't breathe.  Me thinks Grammy was an elf.)   The brown one has actually held up well enough that I've worn it out twice, although I let it out a bit as I am fond of breathing.  (Have I mentioned my grandmother was an elf?)  She would have been in her early/mid twenties when she was wearing these around about 1952.     The white/blue dress is from the same period and is the one my great-grandmother wore to my grandparent's wedding.  (I wanted to include pictures -- the dresses are *fabulous* but they seem to be in a very safe place.  A very very safe place.   You know how it is.)

I don't think you can see much of the seaming (wow but I need a better camera...) but the lines and details are amazing.   I plan to copy all of them, so I'll be able to share what was going on inside and all the nifty little gussets and pleats an whatnot.   My plan it to start with Meema's as the sleeves are just amazing.  (Trust me) and its by far the most fragile of the three.

I have to finish up a trio of UFOs (sooooo veeerrrryyyyy cloooose) and then its onto copying!  (copying RTW seems to be my thing lately.  I just haven't been in the mood for pattern fitting.)

Does anyone else out there have things your grandmother wore?   Any links?  I'd love to see them.   I have books on fashion history, but I think its just as interesting to see what people were really wearing, rather than the couture stunners that dazzle but weren't really the sorts of things the motley crew would be wearing around and about.
Posted by Allison at 9:07 PM