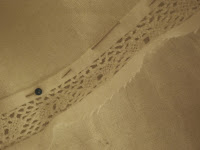 Time consuming... but pretty.   If you are unfamiliar, the basic idea is you pop some lace onto a piece of fabric and sew down the edges.  Then you cut away the fabric underneath, roll up the raw edges and sew them down.  This results in nifty see through sections.  I used this tutorial for the insertion lace (near the bottom -- check out Thread Theory's beautiful polka-dot version while you're there) 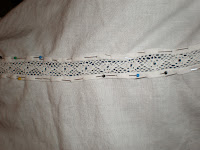 Rather than use the official lace placement guidelines that came with the pattern, I've been putting it along the seam (so the lace acts as the seam) So far I've only done the front, but I'm thinking about going all the way around.   Still on the fence, mostly due to all the rolling and pinning that would involve.  (The original only has lace on the front) 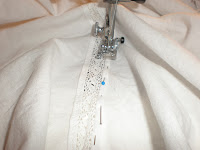 I'm also deciding what I want to do about the neckline.   I'm not in love with the original squared off-ness (the lace pattern, that is, I like sqaure in general)  and the slip has developed a bit of a gape in the center front, so I'm thinking of a scoop or a v....

Continuing the variations, I find I really like the look of the rolled seams on the outside.  Really, the should be internal, but the fabric is so thin they show up as brighter stripes no matter what and I rather like the texture they add by being on the outside.

I've cleverly not sewn any other seams, so I can take my time deciding.  (Fortuitous accident-ish -- the original plan was to convert all seams to lace.....) 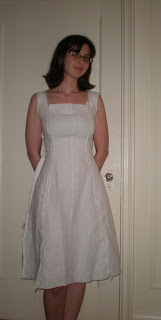 (You can't tell, but I've been thwarting a very persistent gray cat who seems determined to help me write this post.)

Anyhow --- I think I've decided to ditch the ruffle on the bottom (I was never going to do the pleats.  Lets be honest about those *ever* getting ironed) as white + lace + ruffle = a little sweeter than I think I can really handle.  Straight lines and angles make it feel a bit more modern and a bit more like it is intended for an adult.