A box full of vintage patterns 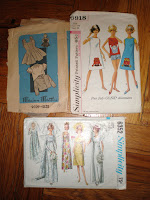 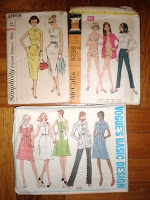 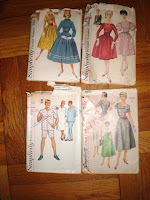 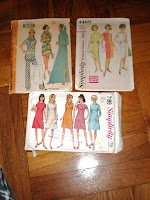 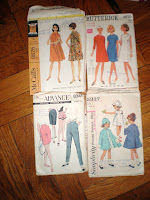 This weekend, Mom went to the Maryland Sewing Guild's annual meeting - I'd decided it wasn't for me, but ended up I meeting up with her afterwards, and managed to arrive in time for clean-up.  Turns out it was a good thing I did - there were literally hundreds and hundreds of patterns (a reasonable estimate would be about a thousand) left over from the swap that no one wanted and they were going to throw away.   Having already looked through them myself, I knew there were several 60's patterns, and there were sure to be more - so I tried to explain about ebay, and how the club could make a ton of money, but they weren't interested.  They just wanted them gone - to keep, to give to charity, to sell, they didn't care, just as long as they were out of the room.    Anyhow, I mamanged to get enough people chattering that several people volunteered to take things to Goodwill (a US charity shop) to keep them from being tossed out.  (There were also about a dozen large trashbags full of fabric that were taken away - being good I didn't go near them, but I know they went to Goodwill rather than a dumpster.)   Anyhow, of these thousand or so patterns, I ended up with three large boxes in addition to the dozen or so I'd chosen for myself.    When I got home, Kel and I sorted through them (he is all about ebay) and of the nearly 300 I had, there were approximately 30 patterns from the 50's 60's and 70's, several of which are still in factory folds.  (The rest we took to Goodwill this afternoon)  I'm still in shock.    There are a couple that I am keeping, there are a couple that I am going to give away via the blog (probably in November) and the rest we are going to sell on ebay.   I'll let you know when they go up, should you be interested.  (Also - people I know in real life - there are only a smattering of what I have in the pictures shown here - if you are interested, let me know and I'll let you paw through them)
Posted by Allison at 11:39 PM

Email ThisBlogThis!Share to TwitterShare to FacebookShare to Pinterest
Labels: patterns