black and white and... 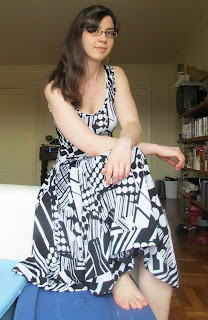 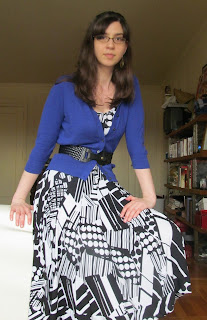 I'm really not sure what to make of this dress - I really like it, without actually liking it at all.  (I know)  I was talked into buying the fabric, against my better judgement, and on its own, its a bit (a lot) much.  Since then, it's grown on me, and now gives me flashes of the destruction of the Death Star and/or  Speed Racer, depending on the angle I see it from.   ...and I do like the Death Star.   However, from time to time, I see crazy early 90s insanity, which I'm not so fond of.  But hey -- we're focusing on the Death Star.

Actually, its kind of a Rorschach test of a dress - so - what do you see?  hmm... very interesting...

I find I like it best toned down a notch or twelve with a sweater - I love black and white, but everything is better with color (and a nice section of solids, so one's eyes aren't fried out) 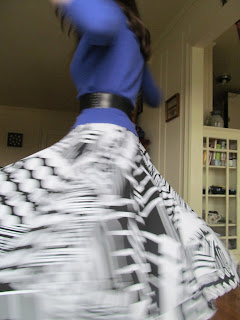 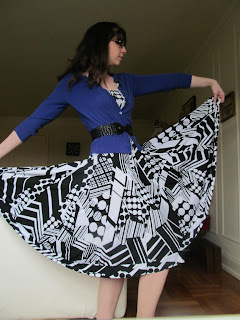 Anyhow - it is the fourth incarnation of the many-paneled dress that started out as an experiment with old bedsheets and immediately became one of my favorite patterns. (versions one, two and three - information on drafting here)  The skirt is enormous, far more than a full circle, and flares out straight at the waist if I spin fast enough.   (This can be slightly problematic when dancing, but then, that's what leggings are for...)

I'm starting to think it would also work really well with brightly color stockings....
Posted by Allison at 5:43 PM