On a wired connection, still not mine, but the second half of the test, that yes, it really is the service provider's fault and that they need to fix the damn thing, because this is getting ridiculous. 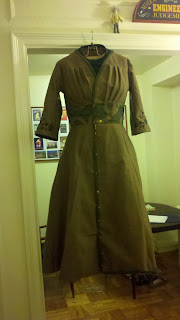 Anyway, another picture of the jacket - this time in its current state.  Its the same pattern as the blue jacket and white lace shirt  - but details later, when I am not perched on a friend's bed, ostensibly just to test that my computer is functional.