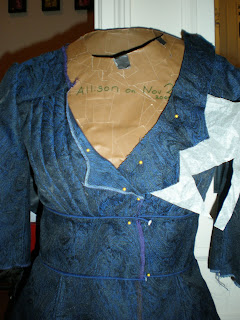 The jacket is more or less as it was before, now with half a lining (I screwed up part of it with overly large seam allowances) and the beginnings of a fancy collar (with tissue paper stuck underneath so you can see it)  However, it stopped feeling like play-time and started to be a slog, so I set it aside for a little while. 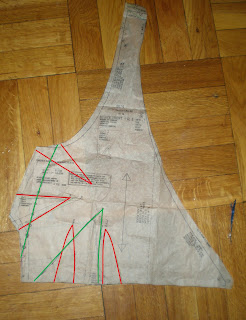 Instead, I started in on NewLook 6674, a wrap dress.  I figured it would require minimal fitting, and the simple lines would be good for a very busy print I've been trying to find a use for.  (Does one refer to the pattern of a batik as a print?  hmm.. I think not.  perhaps just pattern. )   Anyhow, this pattern, print or whatever we're calling it reminds me of space, all blues, purples and turquoises on a dark blue field, arranged in patterns of concentric circles and generalized dots.  (I haven't gotten a good picture of it yet.)    Anyhow, my first attempt at fitting it, using the darts marked in red was an unparalleled disaster.   I had puffy bust like you wouldn't believe ... well,  given you can see the fairly bizarre dart placement, I'm sure you can.   (and this is despite a quickie muslin)  When I found myself plotting to make it into a skirt instead, I immediately pulled out my seam ripper and started again...   this time I did the dart and crop marked in green.   It lead to a much smoother fit, but a far and away lower neckline.  (we're talking nearly to the bottom of my bust here, hence no pictures at the moment.   While there is a time and a place for a low cut dress, I'm not sure that pictures on the internet are the one I'm going to go with just now. )  Due to the nature of the neckline, a standard tank won't work underneath it for general wear, so I plan to make what I can only describe as a breast-band.   Think of an O, made of knit or somesuch and about 5 inches high that I could pull on over my bust and won't need straps -- me thinks this ought to work.  Other than the absurdly deep neckline, I rather like this pattern and will probably make it up again... although I will be adding a bit more to the front when I do. 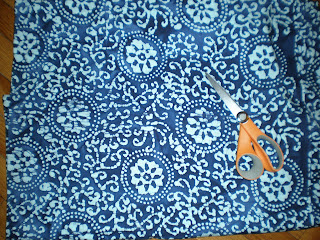 And finally, gratuitous fabric post.  Remember back in, maybe April* when I finished stash-bast mark one, and decided I was allowed a treat?  Here it is!  (and by gosh and by golly, as it ANOTHER blue batik?  will wonders never cease?)  scissors are hanging out for scale.

*I'd link, but google+ is still digesting my pictures.  So think happy thoughts of regurgitation.