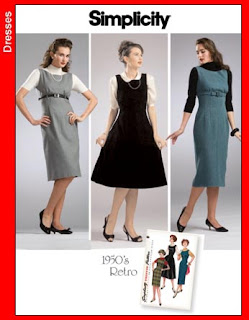 This is a short ramble on the theme of 'what sort of fitting block did they use for this pattern?'

Currently working on Simplicity 3673 - both views B&C  (A is really the same as B, just with a self fabric belt. They were being sneaky and trying to claim it's separate.)  Why?   You'll see!  Anyhow -- I decided to take Gertie's advice and look at the finished garment measurements, and found that based on my bust and hips I needed a 10 on top and a 14 on bottom, which  leads into the theme of the fitting block.

From everything I've read the fashion industry designs most things (clothes, patterns, whatever) for what they call the 'ideal figure'  - a body with even hips and shoulders, a six inch or less disparity between waist and hips, a B cup and around about 5'6" tall.   Its fairly simple to fit and a reasonable base for alterations.   Now, I'm quite used to alterations, I'm 5'9", wear a D and have a 14 inch disparity between my waist and hips.   I'm also a nearly textbook hourglass, with only a 1 inch disparity between my shoulders and hips.   So,  this leads me to wonder, what sort of block did they use while designing this pattern?  It feels like they were going for the inverted triangle body type, and I am honestly fascinated, but I suppose I will never know.

Anyhow, as for comments on the pattern itself -- I really like it so far.    Its almost all the way made up and has come together very nicely with only minimal alterations.   As I chose the size to match my bust, I had to take a large wedge out of the center front to get it down to the right size to fit my shoulders -- I also added a little bit of length to the front and back bodice to accommodate a bit more of a fako FBA.    I chose a two tiered skirt (flowy over sheath)  which has been a bit interesting.    This dress has an empire waist, so the darts are responsible for nearly all the shaping in the pattern.   I had to expand them around the waist and under the bust to accommodate the transition between pattern sizes and release them at the hips to get the ease I wanted to move comfortably.  The full skirt (which is still in progress) was much easier, the darts that were marked seem to be working just fine, and I plan to take the excess out of the side seams.