Which doesn't look a thing like I had intended.   Turns out there are these wacky things called "seam allowances" and just because the front lines up perfectly when one is playing with the lapels, and happens to think "hey, think would make a kickass motorcycle style jacket" doesn't actually mean there is quite enough fabric to make it work.   Who woulda thunk?    Ah well.   I have a great big pile of white, which is yet to be cut out, and may very well end up incorporating design features at a much earlier stage in this whole crazy process.  (I am still thinking thoughts, but it is going to be awesome.  Just so you know.)

And then, there is the second "what on earth was I thinking, oh wait, guess I wasn't" aspect of this particular project, i.e.  obtaining the perfect zipper. I live in Philly, we have 4th street.   (skip ahead if you are familiar with the area)   Once upon a time the city planners decided it would be handy if all the merchants of a particular type were located in the same place so that people could comparison shop to their hearts content and generally be assured of a good deal.  Not much of this has remained over the intervening centuries, but we still have jewelers row (solid diamonds) and fabric row (about 4 blocks of 4th street south of South) on this street (which is sadly in its decline) one can find just about anything, with the exception of batik calico cottons, a particular weakness of mine, so I don't often bother.    Not long after writing the last post it suddenly occurred to me that I was an idiot, and that there was a damn good chance one of the stores would have what I wanted.  and lo and behold, I found my perfect zipper, for a whopping 95 cents.   Anyhow, thank you to those of you who got in touch with me either via the blog or IRL with sources - I have been happily perusing them and will probably end up getting some of the wackier stuff at some point (such as totally clear zippers!) 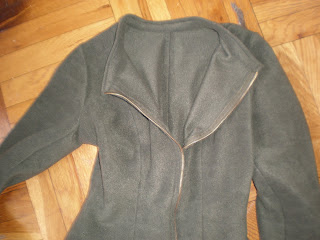 However, despite everything, I have ended up with a lovely jacket that I intended to get a great deal of use out of.   As usual, there are any number of errors - the side pulls oddly, the neckline is slightly crooked, the hips are just slightly wonky, but I get to fix them in the white version, and in all honesty, who else is ever going to look that closely?   so, I say Huzzah to Thee green jacket! welcome to my closet!
Posted by Allison at 5:36 PM