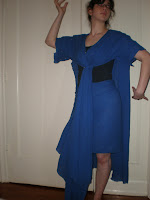 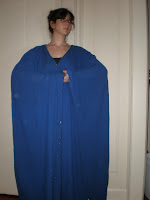 Things may have gone a little off the rails last night..  I decided I wanted to use my new blue gauze to make Tanit Isis' Grecian dress, however, when I got home I remembered the printer is broken, and the nearest one I have access to is further away than I cared to go.  So I winged it.     I spent a while looking at her techical drawings, patterns and instructions and then basically just re-drafted it - and by 'it' I mean an insane series of costume like things.  I still haven't quite hit her original concept. 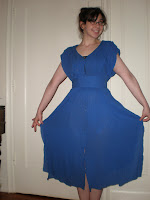 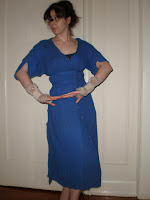 Now, for a while, I intended to veer off, as I thought longer sleeves would be nice (and I like them in the pictures) but IRL they weren't working for me.  The bottom right is the current incarnation, which I was really annoyed with last night, but am actually kind of liking in the picture.  So we shall see what becomes of it.
Come the cold light of day, I couldn't face the gauze anymore, and decided it might be nice to actually finish something.  Thus, I've added sleeves and a zipper to the white jacket.  It still needs a collar, cuffs and a hem and it will be done.  I fixed the odd hip curve I had on the last one - but a few more flaws are showing up in greater prominence on this version  (primarily around the sleeves)  Not sure if I set them in a different way or if green hides more mistakes.   Also, the white turns out to be just slightly transparent, so all the seams show through.  C'est la vie.   I still like it and plan to wear it, so, it becomes a great big whatever. 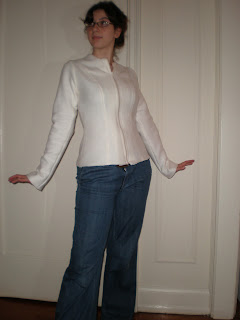 Oh, and my halloween costume is a surprise. :)    Mostly because I've been refusing to tell people I know IRL, as I want to see jaws drop and helpless laughter, which I think will be more likely if no one knows what to expect.     However, it will be glorious, and I will fully document the process so I can share it later.
Posted by Allison at 6:21 PM