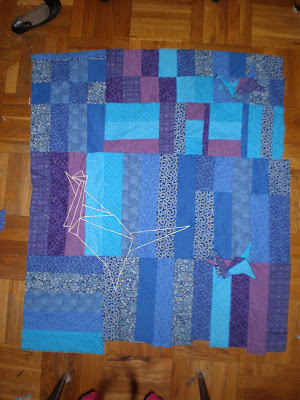 I tried to come up with a version of 'captain planet' suitable for 'stealth cranes' but the syllables  are wrong and the 15 seconds of effort I put into it just didn't pay off.

Anyway - can you spot the other two cranes?   the ribbon I was using is a pain and a half to work with, and after various misfires for additional cranes, I decided to go with much smaller applique versions with the scraps from the main project.   Both are on the right side of the photo, one top, one bottom. 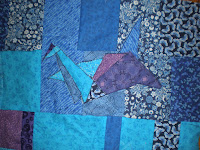 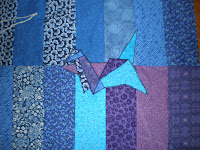 They are starting to remind me of stained glass.

At least in the pictures... 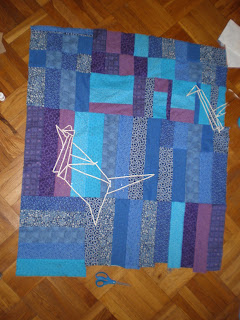 Anyhow, on to the dreaded quilting, which I think will be mostly stitching in the ditch, before all will power leaves me.   I am emphatically *not* one of nature's quilters.

An aborted attempt at a second ribbon crane.   I like the three dimentionality they bring to the project, but it did start to look kind of funny.
Posted by Allison at 6:15 PM