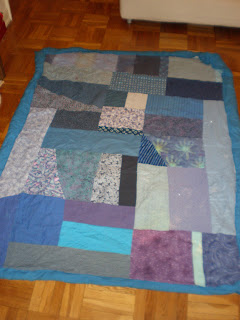 Tanit-Isis' crazy quilt post got me thinking about mine. It was one of those wacky projects that ended up taking far and away longer than I ever anticipated. This was back in high school when the majority of my projects were massive costuming endeavors (there were a series of Elizabethan gowns) and I wanted a movie watching project, so I decided to take all the scraps I'd accumulated from years of screwing around, and make a crazy quilt. I also decided that every single stitch would be hand sewn. fast forward several years, and I'm about to head to college... I'd gotten the whole top pieced together by the middle of the summer, and started working on the actual quilting -- also entirely hand sewn. Now, I was working at a summer camp in southern Virginia at the time, a summer camp without air conditioning. Quilting did not advance as far as it could have... Anyhow, I had it in my head that *this* would be my quilt at college, so I basted the thing, and took it with me. For years, I'd pull out the hoop when I was watching a movie in my room and get a bit more done... this continued through grad school, by which time almost everything was finished. But then I graduated, moved, got a bigger bed, and with that needed a new and larger quilt. Having 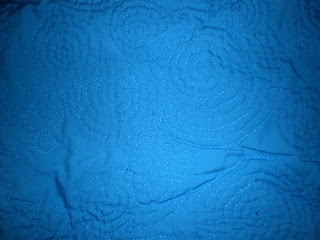 learned my lessons, my lovely crazy quilt was carefully packed away to finish soon. I don't think I've taken it out until today (this is a lag of approximately two years) There are only a few panels left to quilt, and I could probably get it done in several months, but it seems more of a wintertime project, so me thinks it will once again be lovingly packed away to wait for future inspiration and a dire need for a MASSIVE amount of handwork.

(Yes, I know the spirals are a little crazy. Each panels has its own quilting pattern based on the fabric. I thought it was pretty and wanted to share (i.e. show off) )
Posted by Allison at 10:28 PM