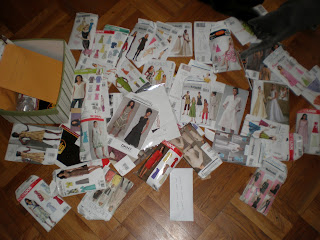 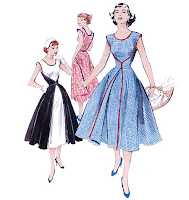 Perusing my patterns, lovely little packets of bliss that they are, and trying to decide what to do now that I am 'allowed' to buy fabric again, I came back to Butterick 4790, which I think would be lovely in green batik. (So, yes, I think everything would be lovely in green batik, but I do try to limit it) But as it was Sunday evening, on a holiday no less, I didn't even bother going to the store and instead dug through my stash, because I really can't go all that long without something to play with. During my dig, I came upon an old wrap skirt I'd bought in college but hadn't worn for years because it had no shaping and was impressively unflattering. (To the point I refused to photograph it on me in its before state). I still loved the color and the embroidery, so I decided it was ripe for refashion. So....... 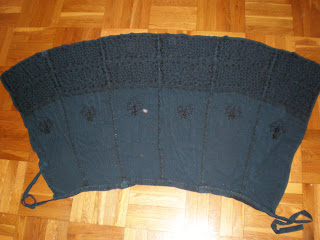 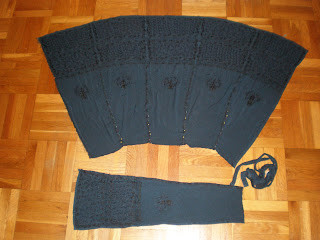 After playing with it for a bit, I ended up settling on a fitted sundress. As five panels were sufficient to cover me, and I thought a bodice would be a nice idea, I removed the tie and the sixth panel, then pinned the other five in a bit. I then pinned everything to myself and attempted to pose like a Hindu goddess. (This was somewhat less than successful) (Context, I bought this from an Indian shop, and all the all the embroidery is on that general theme) (Yes mom, in the final version the bodice will in fact go all the way around my body. Don't worry.)


All of which leads me to.... I still have an awful lot of fabric. Lots and lots and lots. I've also got ideas for some of it, so with the exception of the 50s cocktail dress I'm planning for a friend's wedding, and the aforementioned green batik, I'm going back on fabric fast for another ten items. The rules of the game are any fabric purchased prior to January 2011 counts, as do refashions which take a previously unwearable garment and turn it into something I now enjoy.