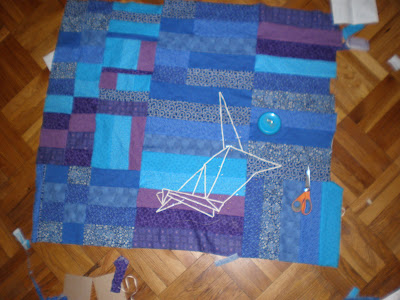 More cranes?  or stop here?   Some context - a friend of mine has a rather nasty form of cancer and has been making and collecting paper cranes for good luck.   While I was visiting her a few weeks ago, she was showing me some of the other things people had made, a metal crane, a glass crane, etc...  and I decided I would do something in fabric.   I asked if she'd like a quilt and for her favorite colors, and then starting plotting.    At first I'd worked out a patchwork block that looked like a paper crane, but it was going to take forever and looked...cutsy.   Kirby is many things, but cutsy really isn't one of them.   Anyway, I came up with a more or less random square based patchwork with cranes traced out in ribbon on top.     I can't decide if one looks interesting on its own, or odd, as though it was just popped on as an afterthought. 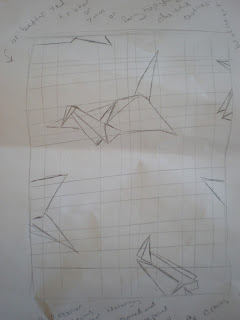 The original design calls for several, poking in from various angles. But I'm not sure how well it translates to the real world.    I'll probably pin on a few more and see - but thoughts from brains other than my own would be most welcome. 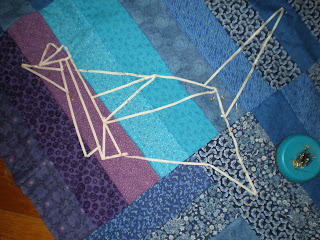