Ruminations whilst I still have power

Tuesday we had a earthquake.   Sunday we're having a hurricane.   Today, I bought polar fleece.    I figured swarms of locusts were next, and provided we were doing the whole end up the world thing, the fact that I was blowing my stash-busting vow to bits was pretty insignificant.  (plus, I found really cool buttons!) 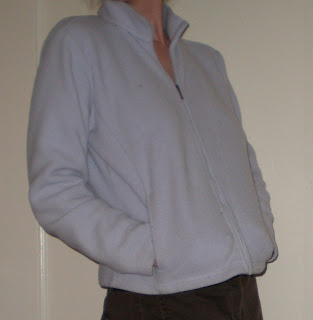 For the past two years I've more or less lived in this shapeless purple confection.    Despite holding up rather well to everything I throw at it (10 points to L.L. Bean) it remains shapeless and frankly altogether unflattering -- but it is warm, and when it starts to get cold (or my office neglects to turn the AC down from the heat wave induced peak, despite our current mild temperatures) I choose warmth over style every single day.    So, today (while bundled up in an extra-cold lab) I decided I needed new polar fleece, flattering polar fleece, and if at all possible, exquisitely tailored, over the top, did-she-really-make-*that*-out-of-polar-fleece polar fleece.   Cue Badgley Mischka.   May I introduce V1040?  This baby is going to be made of moss-green polar fleece, and as I am fairly certain to be trapped inside for significant portions of the weekend as the storm rages on, perhaps even by Monday. 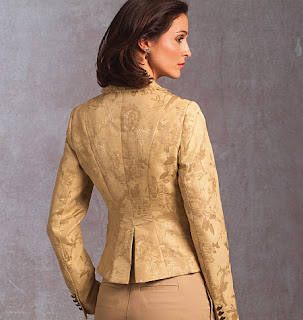