The project I thought would never end... 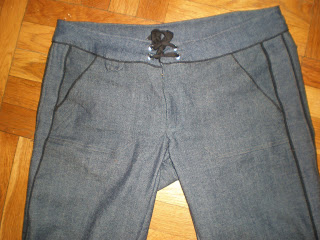 ... the tuxedo jeans are DONE! DONE DONE DONE DONE DONE. Which took faaaaar and away too long. They have been nearly there for about a week, but I just couldn't face the belt loops, due to a combination of my utter loathing of the tedium involved (odd, considering all the detail work I really enjoy) (well, maybe its because denim folded over so many times in such a small place is a pain to work with...) and the fact that I grew to really like the piping at the waist, and was upset the belt would cover it. (and none of my belts are black, so it was going to look funny.) Anyhow, a minor epiphany later, and I realized the waist band was essentially a casing, so why not do a draw string.... and because it was awesome, why not do two? Granted, putting in the grommets required taking it apart to a certain degree, but it was worth it. I took advantage of the waistband being open to add a loop for my badge (required at the office) so I could happily be belt free and neck-lanyard-free. Its on top of the pocket on the left.

The color in the picture isn't quite right (when is it ever?) and the jeans are actually a few shades darker. Buuuut it does show off all the piping. : p 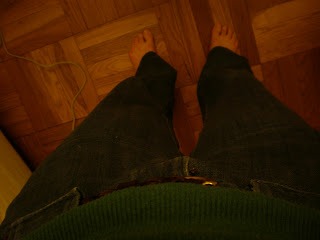 Anyhow, for Me-Made-March:
When I woke up it was below freezing, and not expected to get much above it during the course of the day, so I ended up nixing my planned outfit (involving a skirt) and going back to the same old jeans. (I pretty much live in them during the winter anyway, so at least its accurate.) And with the cold I just went with a thick sweater... which makes this a bit boring, but hey! documentation!